From a live event hosted by Josh Ledgard w/ guest Bailey Nelson who heads up community for Glowforge.com. Glowforge is a desktop 3D laser printer/cutter/engraver that makes magical things at the push of a button.

It’s not an exaggeration. Glowforge raised $27.9 million dollars during their 30-day crowdfunding campaign. By any measure, it’s a phenomenal success.

To be clear, this was not on Kickstarter. There was no huge Kickstarter community to draw from. Starting from a small list, Glowforge needed to build up their audience size to good condition before the official launch.

They used KickoffLabs to generate more than 10,000 emails to seed their initial list and kickoff the crowdfunding campaign.

Here’s how they did it…

“We were pleased to find such a powerful viral tool for non-technical people.” – Bailey from Glowforge

Leads were trickling in

Glowforge first put up a “stealth mode” website with a basic email capture form. To be clear, this first version was self-hosted and not yet connected to KickoffLabs. 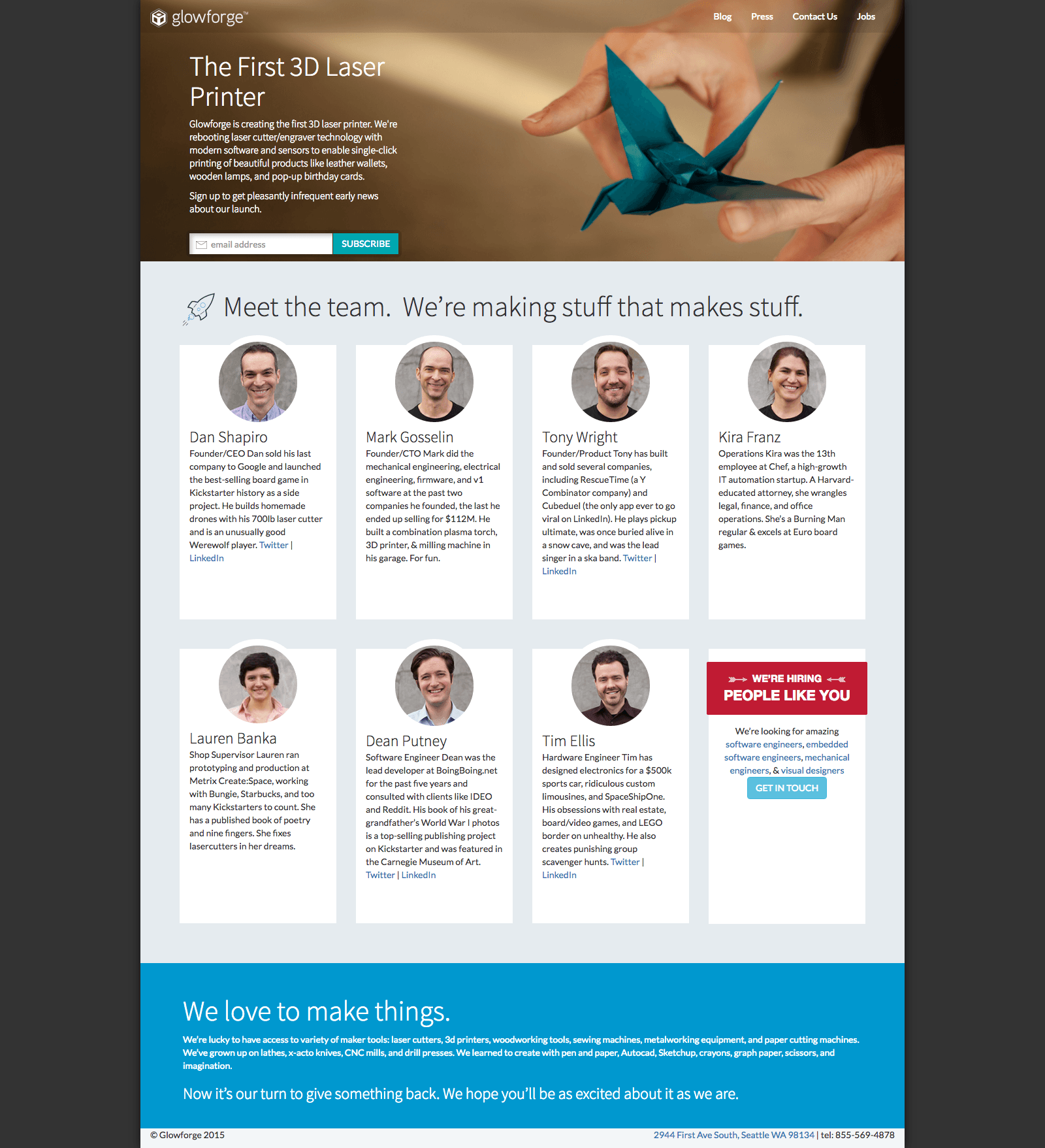 Even with a mention in the New York Times, the page got a lot of visits but only gathered about 800 emails. A vague website clearly wasn’t working.

Although doing social media for crowdfunding research, they stumbled across the Tim Ferriss article on Harry’s Razors launch, and the power of social referrals & rewards for list building.

With that knowledge, Glowforge decided to invest in email marketing; where they could develop a relationship with potential backers via email first.

After all, email drives the highest ROI (return on investment) and CTR (click-through rates) than any other platform.

Using KickoffLabs Import Leads feature, Glowforge brought in their existing subscriber list of 800 or so leads. Doing so assigns imported existing leads a unique social referral link they can start sharing with friends.

From there, they connected their KickoffLabs campaign to a third-party email newsletter provider (easily connect to MailChimp, Aweber and others). This lets you pass custom fields, like KickoffLabs unique social share links and include them in your email newsletters.

The KickoffLabs campaign was formally kicked off by sending an email newsletter to their initial list.

Since the share link was already created for them it was easy to start referring friends. This helped get the ball rolling.

The Glowforge team custom built their landing page. Integration with KickoffLabs was via our AnyForm script installed into the code of the page.

AnyForm connects KickoffLabs to any third-party template or form, and gives you access to our viral tools.

This is what Glowforge.com looked like during the KickoffLabs campaign.

It’s a fairly simple page with:

As a best practice, the call-to-action button text also matches the incentive subheadline. “Half off, please”. Awesome!

We especially like the progression of the call-to-action button text.

Where they previously started with a basic (and not very effective) “SUBSCRIBE” call-to-action. 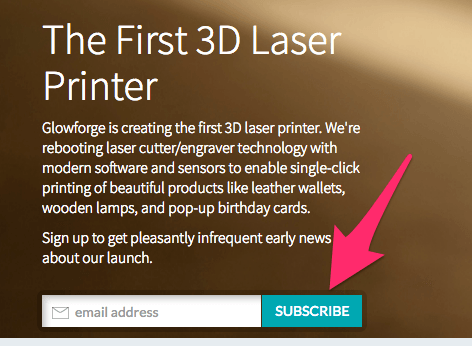 Changed things up to “Notify me”, which still doesn’t do much to motivate signups. 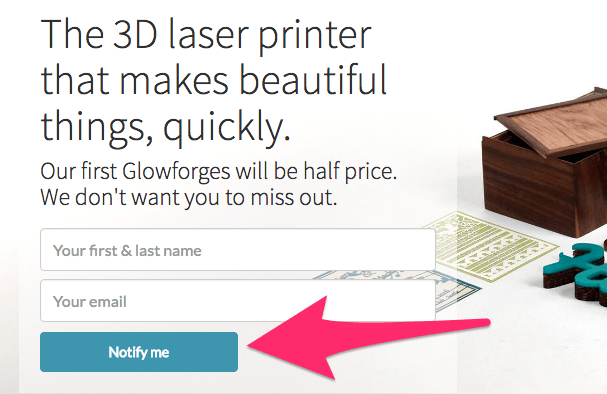 And finally, hitting the mark with their great action-oriented copy: “Half off, please”. 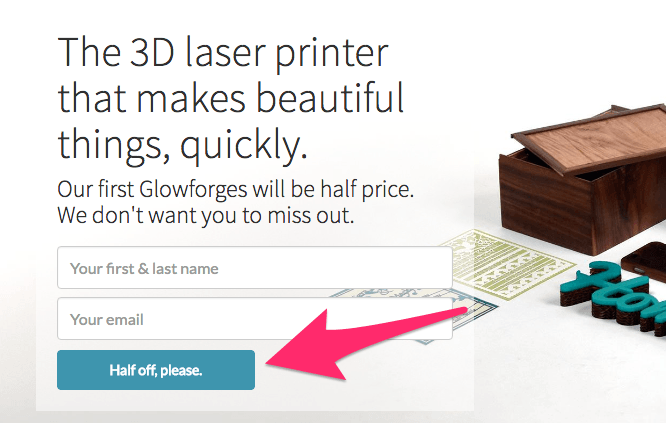 Converting leads anywhere on the page

The landing page didn’t miss opportunities to capture email sign-ups. They placed 2 forms on the page, one the top and another at the bottom.

This is a great strategy because you never know what copy is going to convince somebody. It could be the top hero, bottom features section, testimonials, etc.

It’s a good idea to have a call-to-action visible on the page at all times.

If you use a KickoffLabs theme, we’ve got you covered. Several of our long-form landing page templates feature a bottom signup button ;)

Selling the product, not the discounts

In an effort to capture the highest quality leads possible, the signup page was all about getting the product at half price.

There is no mention of referring friends. People think they’re just signing up for a mailing list.

After signing up, leads are redirected to the thank you page where they can earn additional discounts by sharing with friends.

The Thank You Page

Once leads get to the thank you page, they see there’s an opportunity to get even more than half off.

At this step in the process, the goal is getting people to refer friends. 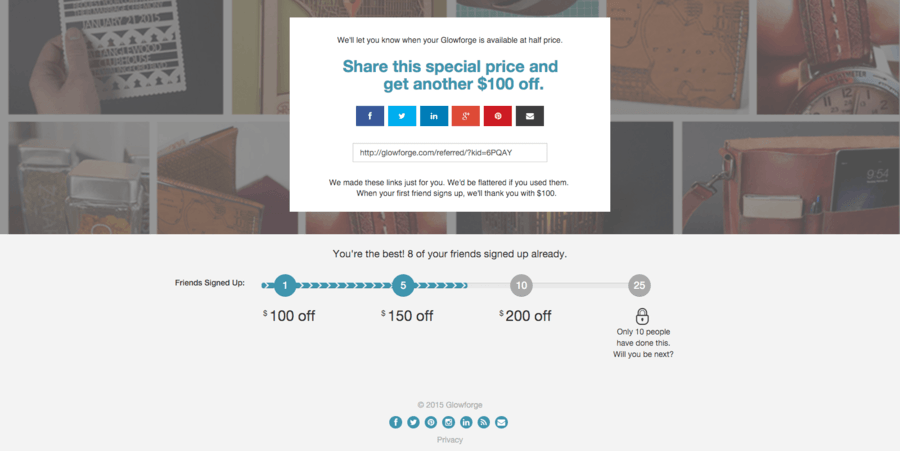 This thank you page worked really well because:

Glowforge used a customized version of our Harry Goes Viral Thanks Page, which encourages people to share by offering up to 5 different reward levels.

Be sure to check out the various thank you page experiences KickoffLabs offers, which includes thank you page templates for prize levels,  leaderboards, waitlists, digital downloads & more!

Glowforge purposely chose low reward levels. If you ask people to bring along 2 or 3 referrals, it feels more achievable and is something they can do right then.

Many people referred just 1 person, and that already doubled the list size.

We generally recommend starting out with a low number for your first reward, like 2 or 3. If you ask people to get 10 referrals as your first level, it can be difficult for some.

If you need help with choosing reward levels, have a look at our Selecting Incentives for Marketing Campaigns article.

Facebook sharing was setup to replicate the landing page experience; combining text, a product shot, and a call-to-action. 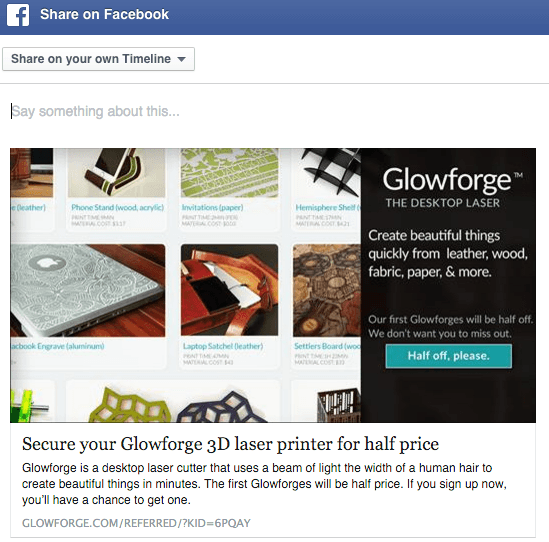 It was a challenge since there were no actual images of the product to show. Instead, leading with things the product can make and with “half-off”.

There’s a lot of online contests that force you to tweet what sounds like a sales offer. This message was kept personal and non-spammy.

“You know me and I’m on the list” was the idea behind the tweets.

Tweets were also updated according to the upcoming launch.

Email sharing was also kept consistent. When someone would click to email a friend, the subject was simple and the message was pre-populated with the core message.

Just in case people changed the email share message, they still had some control over what was being shared.

If a lead shared their unique referral link and a friend clicked the link, they would see a custom greeting widget.

The message was a simple: “Bailey thought you’d like this”. If there was a social picture available, we would also show the picture in the message. This made things feel more personal, like the rest of the copy.

Unfortunately, we don’t have any screenshots of the landing page showing the referral “face” widget :(

However, this is roughly what the referral widget looked like:

This personalized strategy was so effective, it’s now part of their custom built sales referral program and continues onto the custom purchase page on the existing Glowforge website: 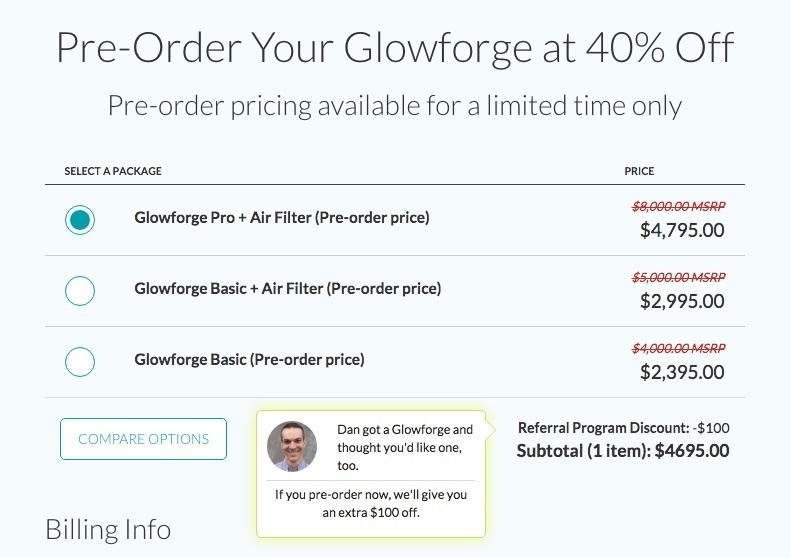 Following up with influencers

When anyone hit 25 referrals, the Glowforge team would reach out personally to leads via email with:

“Hey, I noticed you referred a lot of people. What’s your story? Can we work together?”

These were influencers in relevant communities, where Glowforge was able to offer more discount to those who tell even more people about the campaign.

Especially at this early stage, it was really valuable to see who these influencers were.

The email notifying both leads and the Glowforge team of people who hit this referral level was sent out using KickoffLabs Incentive Emails.

For the email campaign, they ran a first-person campaign where all emails were humanized… with Bailey from Glowforge being the online persona.

Bailey is not a 3D printing aficionado. She’s a relatable, “normal” person who thinks 3D printing is cool.

Before launch, they couldn’t share much information about the product. So in each email she would show a different laser item made with a 3D printer, not the actual printer.

The goal was using emails to tell a story throughout the campaign, where each is an opportunity to prep customers for when the product is available.

Here’s a look at the series of emails that would go out whenever a new lead signed up:

Verify and welcome email – this works like a double-opt in email and is part of our Advanced Fraud Prevention. Helps to ensure your leads are legit. 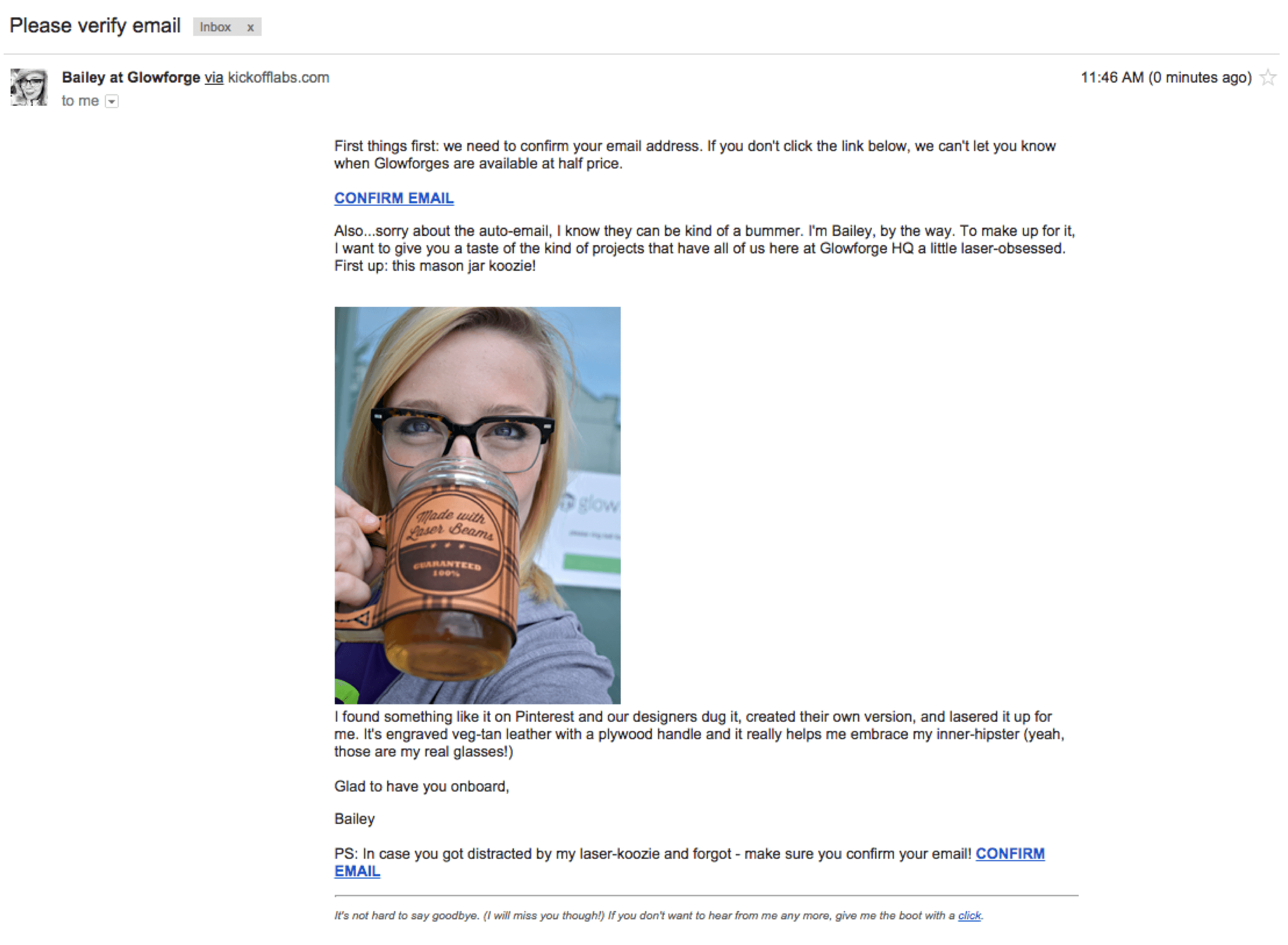 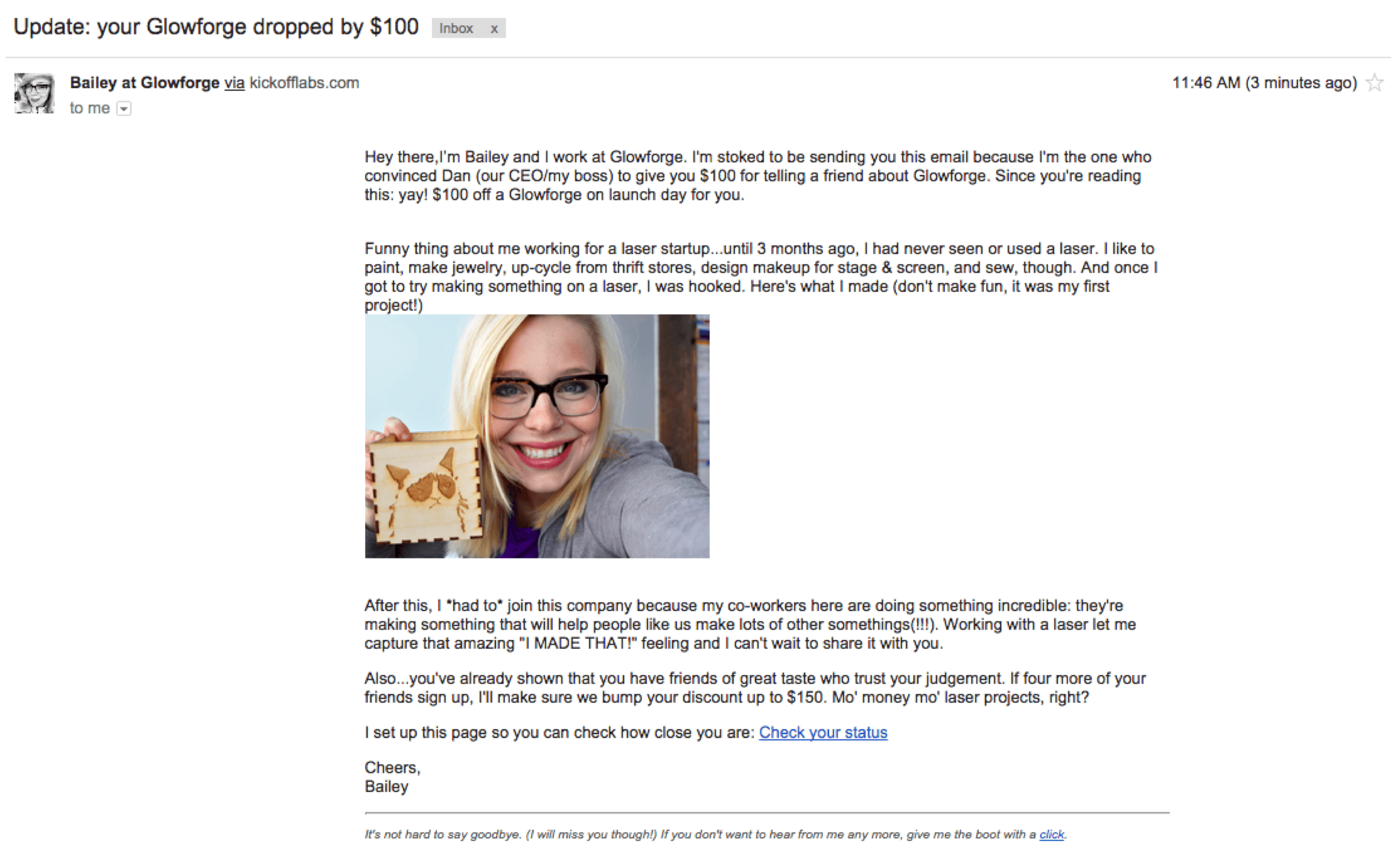 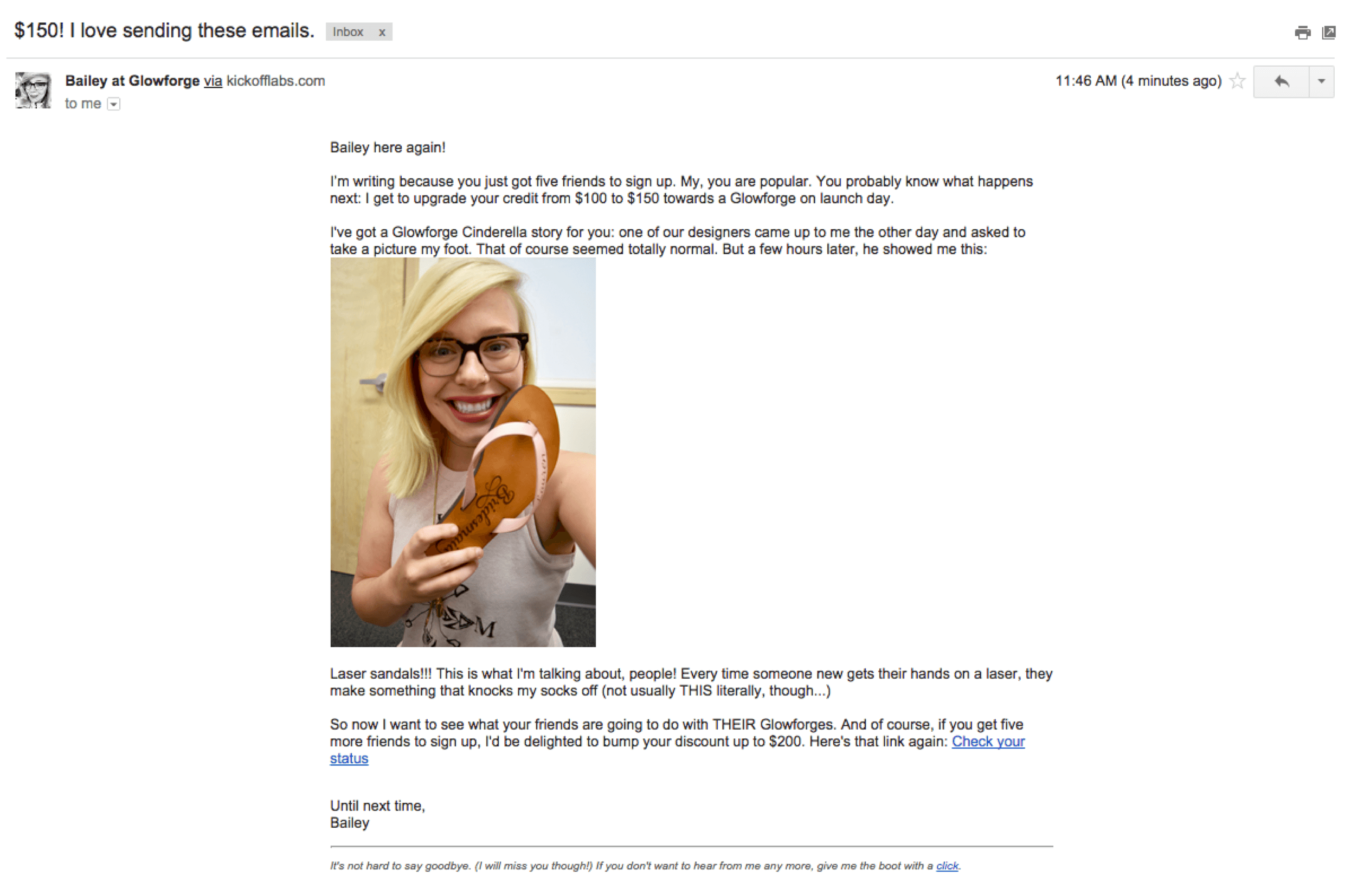 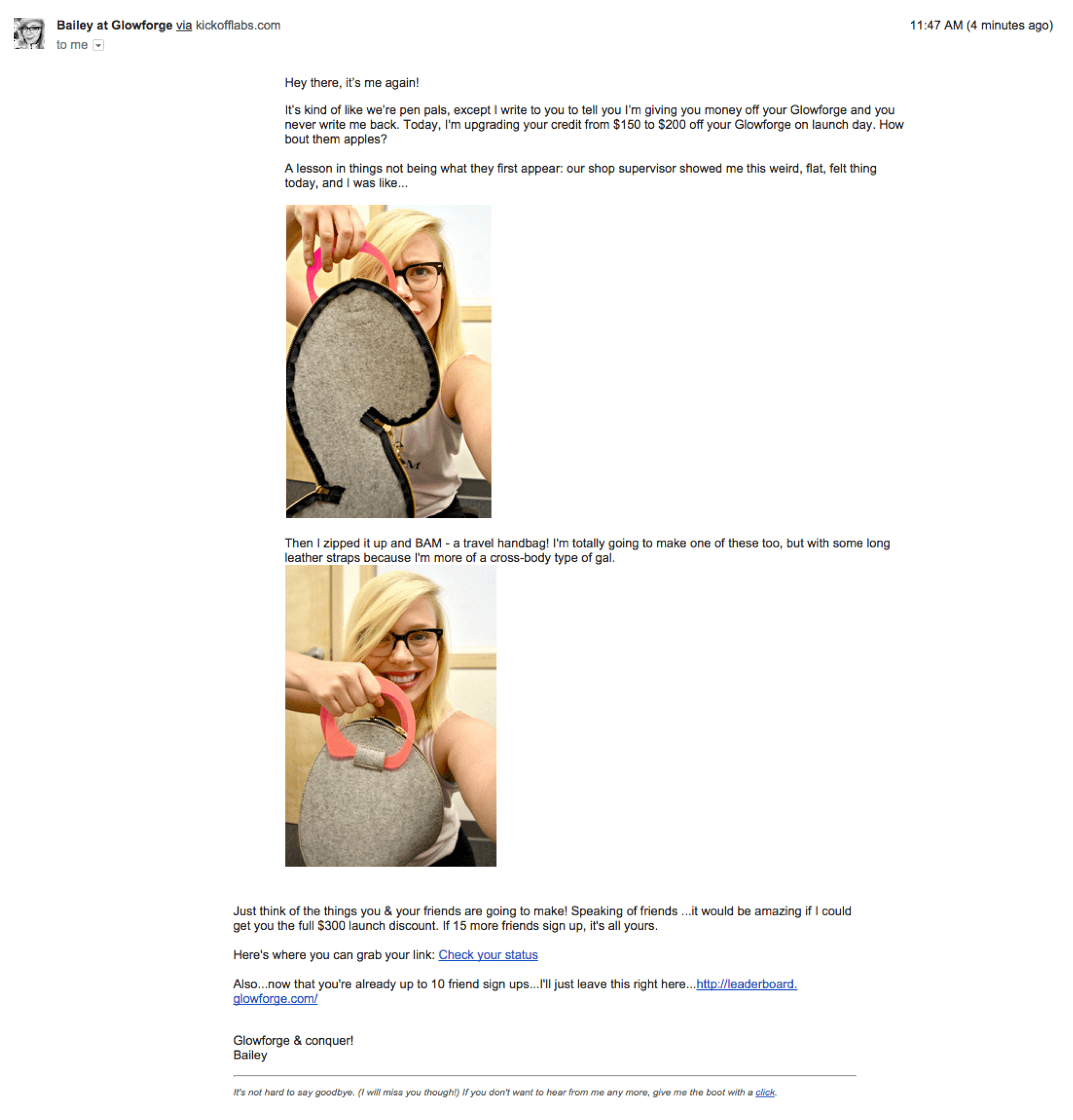 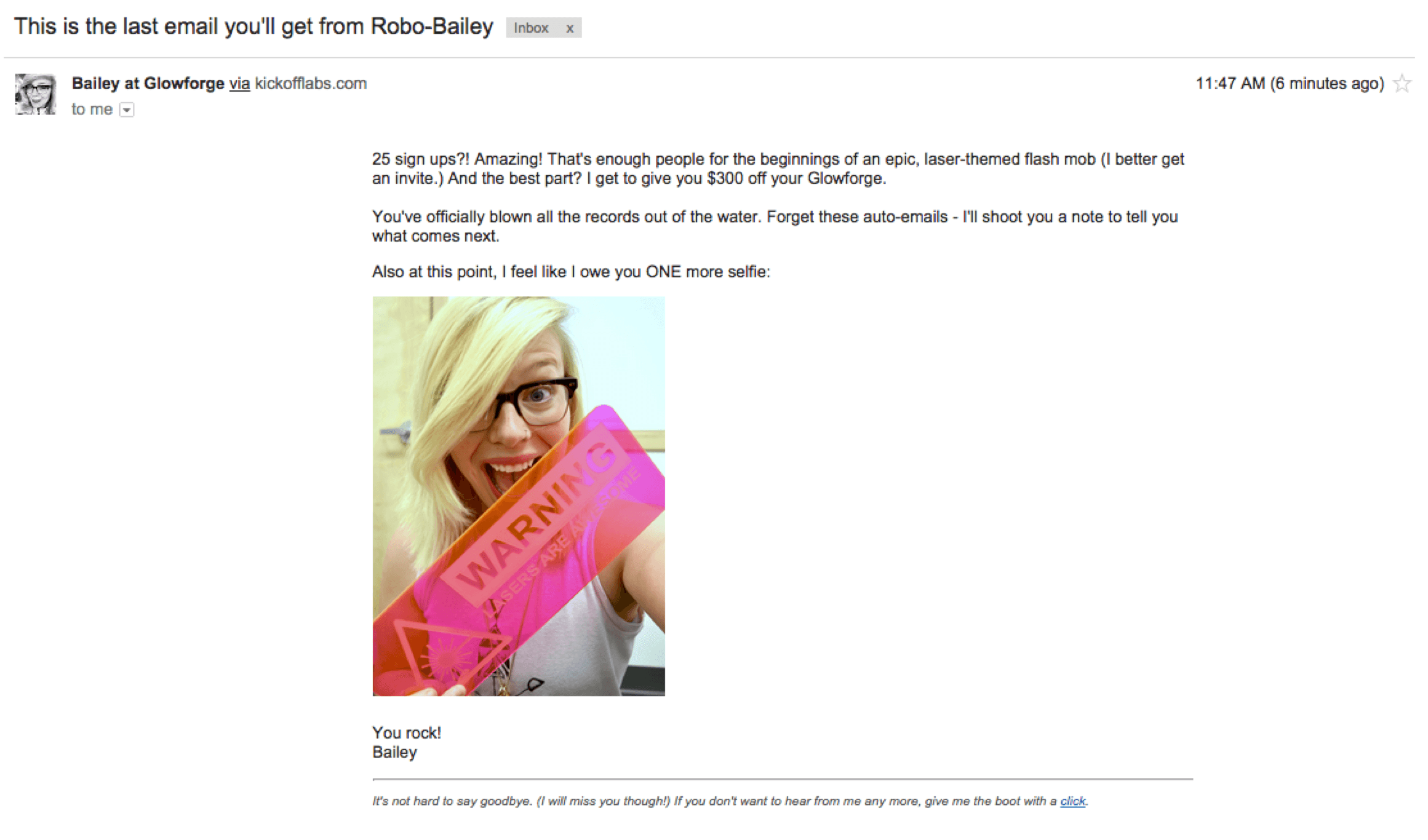 So many people would respond to those emails. People saying: “How cool.”, “How did you make those?”, “So excited for Glowforge!”

As part of the campaign process, Glowforge set up KickoffLabs Advanced Fraud Prevention. This includes tools like email verification, IP address blocking & more, and will automatically show if leads are potentially fake.

There were a few people who tried to game the system, but these were easy to spot.

We had some rules and regulations for referrals, so people who tried to cheat were simply removed from the list.

Other than sending a couple non-automated newsletters (using a third-party email newsletter provider), they didn’t do much else to promote the campaign.

These email newsletters were focused on motivating to keep sharing and linking to a leaderboard thank you page created using KickoffLabs. 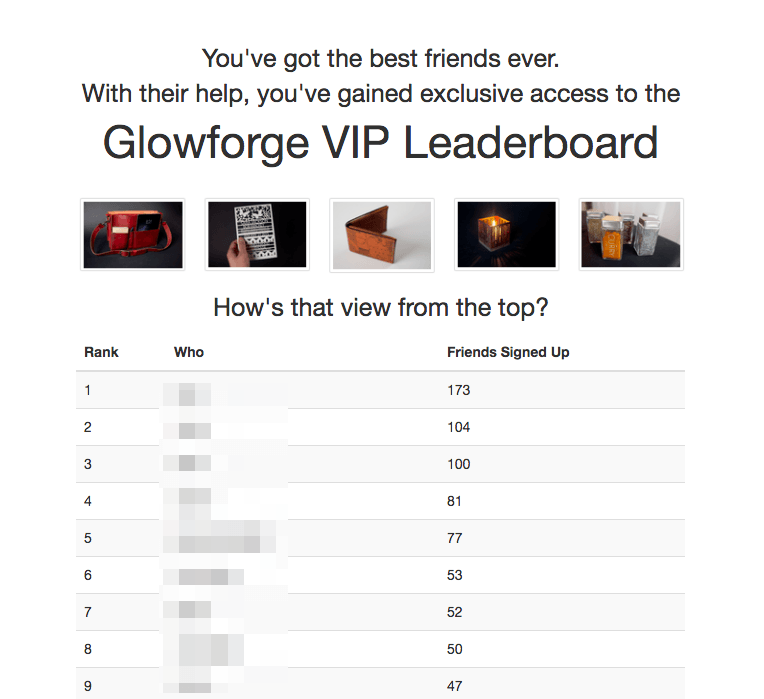 Top referrers were able to see how many people they had gotten to sign up. This gamified the sharing process and drove more conversions from influencers.

They didn’t spend any money on PPC advertising. Most organic traffic came from people sharing on social networks using the thank you page buttons.

2 weeks before launch, they sent out a newsletter letting people know that Glowforge was about to launch. Making sure people got in extra referrals before the campaign stopped (cutoff date was Sept, 24 2015).

On launch day, armed with a list of 10,000+ people they sent an email announcing the launch and driving people to the purchase page directly on their website.

In order to make the launch feel exclusive, they were not posting on social about it. Only their group of email subscribers were in the know and that was intentional.

Currently, they are running Facebook ads thanks to social data KickoffLabs provided about their collected audience. It’s one of the bigger referral sources.

Building a line of customers before launch

Glowforge gathered 10,000 leads during an 8 week campaign, which was above & beyond their expectations.

“It was nice to know we would not be launching to crickets.”

Conversion rates are based on expectations

It’s easy to get a high conversion rate if you’re selling a product for $5. A Glowforge 3D printer costs well above $500 dollars.

They were upfront about the product having a price and were able to achieve a 21% conversion rate. That’s amazing, especially for higher priced items.

When you’re trying to find people who might be willing to invest, it’s essential to have a compelling offer.

The conversion rate was helped a lot by the 77.5% KickoffLabs Viral Boost (the percentage of leads that came from a customer referral).

People are obviously much more inclined to sign-up if a friend recommends it.

Glowforge worked to have a big launch day. They organized press, a press release, and launched the product at an industry event.

KickoffLabs leads converted well into buying customers. Even if people didn’t purchase, a lot of them posted about it and were generally excited about the product launch.

After an 8 week pre-launch campaign using KickoffLabs (on October 1, 2015), Glowforge made the switch from the signup landing page to their full website with a self-hosted crowdfunding campaign.

“There was an incredible response and sales went faster than we expected.”

The rest is history.

Big thanks to Bailey and the entire Glowforge team for allowing KickoffLabs be part of your successful marketing strategy!

See how Glowforge works and order your 3D Laser Printer at Glowforge.com

Be sure to watch the entire interview here (chock full of extra marketing gems)!

If you haven’t yet, sign up for a KickoffLabs account now and launch your very own viral campaign!