Lessons Learned: The Seven Marketing Secrets that Grew MRR 73% in 2013 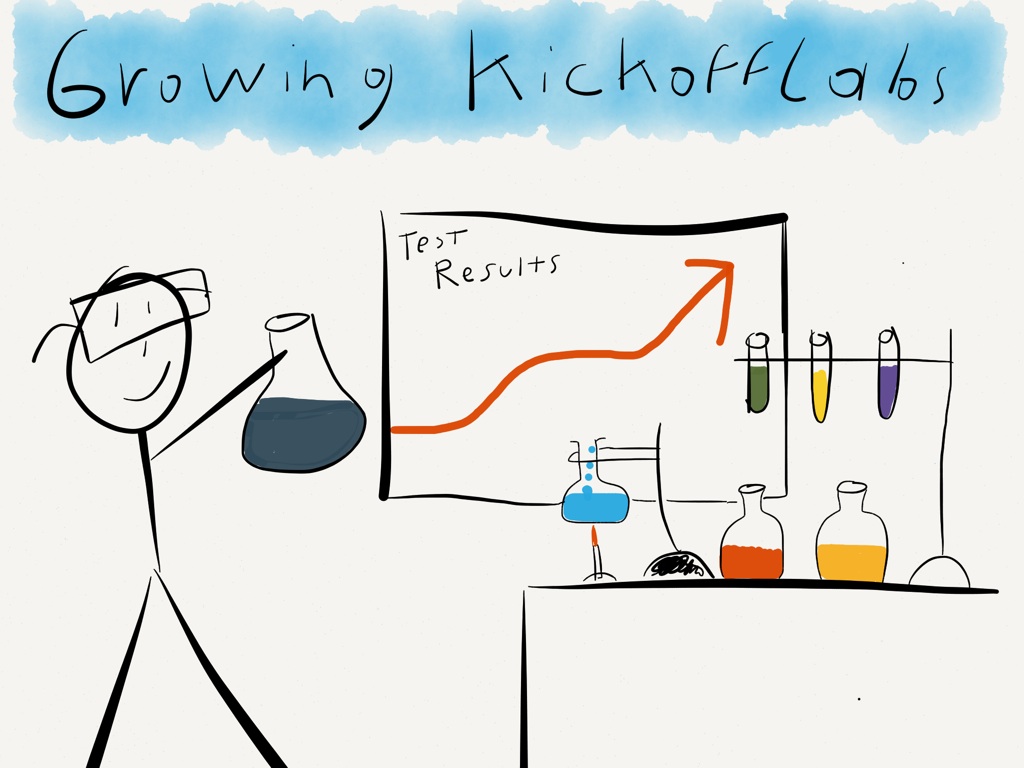 As we move into 2014 at KickoffLabs, we’ve decided to give you the inside scoop on the tests, pricing and marketing experiments we’ve used in 2013 to grow MRR by 73%. We’ll walk you step-by-step through every failure and success we had, and share the lessons we learned in order to help you succeed, too. Ready? Here we go!

1. Should you charge up front or let people have a free trial?

In January 2013, we ran an experiment with trial accounts and decided to offer access to our premium accounts for the first time without committing any money. We still asked our customers to enter credit card information, but we didn’t charge them unless they chose to keep the service at the end of the monthly trial period. In 2012 we had asked people to pay as soon as they entered a credit card.

Assumption: We thought more people would upgrade because they didn’t have to pay on the spot. They would be able to use the product for the next month and get familiar enough with it to want to continue with it.

We did get a slightly higher number of trials and signups, the percentage of customers we ended up billing actually declined. Previously, about 86% of customers who signed up for the service would make it past the first month to become a paying customer. After this experiment, that number dropped to 55% because of the people that dropped out during the trial without having paid anything.

It turns out that people that paid something up front were more invested. We could see they created and published more pages without giving up as easily. They also ended up sticking around longer past the refund period to become long term customers.

Bottom Line:  The slight positive that produced more trial signups was negated by the drop off in customer success and ultimately our ability to bill and retain them.

2. Should you offer a free account or go paid only?

Since launch, we’ve offered a free version of our product. The free account is limited to a small number of themes with KickoffLabs-branded URLs and pages, and our Free subscribers were able to test our services without entering credit card information.

We decided to remove free accounts on July 27, 2013 because we wanted to focus on paying customers.

Assumption: We thought we’d encourage more serious leads to convert to premium accounts by removing access to the free ones.

Here’s that lesson in numbers: while we added 600 people to our mailing lists in July, we only added 350 in August after removing free accounts. We lost about 250 people in 2 months simply by removing the free accounts.

Those 250 people were ones we could have reached out to in other ways — through our regular updates, or Landing Pages 107. Thankfully, we were able to recoup those numbers because of our email opt-in wdiget. Check-out our new and improved Contest Box widget to capture email addresses.

Bottom Line: Even though we expected a decrease in signups, that decrease was much greater than we anticipated. Also, it’s ok to change your mind (we did). We brought back free accounts – and you can sign up for one by clicking here.

3. Does having branding on free accounts work?

For November, we gave free accounts the ability to customize their landing page domain. It would still have KickoffLabs branding, but at least they’d be able to choose their own URL. It was more freedom than they’d had before, and — again — we thought it’d convert more accounts to upgraded services.

Assumption: We thought more people would leverage the free accounts because we knew that access to custom domains was a big upgrade driver. This would lead to more upgrades, and drive more business to our site since all the pages still had KickoffLabs branding.

Again, not the result we expected. We saw upgrade rates drop 50% and it became clear that custom domains were something that pushed people to get serious and upgrade.

Another problem is that the people taking advantage of this didn’t succeed as well as paying customers did. While 75 domains were added, only 20 of them were published — and of those 20, most received little web traffic. Because they got it for free, they didn’t put work into marketing it..

This meant we didn’t get the expected boost from having our branding on truly free accounts. We went back to having free accounts simply be a way for people to get comfortable with our platform before deciding to commit money.  Since then we still get a similar number of upgrades from our branding campaigns.

Bottom Line: Free is great, but the customer who pays (even a dollar) is in a totally different group than the one who’s never paid for anything. Make sure you get the value out of your branding campaign before you cannibalize your primary upgrade drivers.

4. Should you increase your prices?

When we first launched our service 3 years ago, we had a different feel and focus to our product, and set our prices accordingly. We charged 15/25/49, respectively, for our Starter/Premium/Business plans and thought it was great. But as we spent the next year collecting feedback, tweaking designs, adding features, and making the software more user-friendly, we realized we were doing a heck of a lot more than we anticipated. We thought we should charge more for our services.

On May 5, 2012 we raised our prices… the first time. We went from 15/25/49 for our Standard/Premium/Business services to 19/29/99, respectively, for new customers. We made sure to grandfather the old rates for existing customers (because we’re not jerks), and waited to see what happened.

Assumption: We thought that increasing our prices would increase revenue but  decrease our conversion rate.

Our conversion rates didn’t really fall! And our overall revenue increased almost immediately! We thought the higher rates would deter new customers from signing up, but the data proved us wrong on that one. Our cancellation rate even stayed the same.

But before you run off to double your prices, read what happened the second time…

We spent the next 4 months further developing our product. We hired developers and designers to add some really beautiful themes. We felt we’d greatly increased the product’s value, so we raised our prices again and waited for another happy result.

Assumption: Same as the last price increase — increased revenue without a big hit to conversation or cancellation rates.

Surprise! Our conversion rates took a hit this time. They dropped nearly 35% and stayed there. The drop in conversion rates taught us what our customers were willing to pay. We froze our rates and moved onto other experiments.

Bottom line: Pricing can be easily tested and changed. Don’t be afraid to try something new! It can make a significant impact on your bottom line — just remember there will be trade-offs between growing user base and revenues/profitability. There are limits to what people will pay.

5. Are freemium users more likely to upgrade if you give them more before they pay?

Since we launched we’ve been adding new themes/page templates to KickoffLabs. Now we have themes for launching new businesses/campaigns, lead generation, contests, sales and more. Our Premium members have access to all of them, while Free and Starter accounts only have access to a handful of them.

Then we had a thought. “What if,” we wondered out loud, in our offices, “we gave everyone access to all of our themes? Can we convert any of the lower paying customers into higher paying ones by offering them temporary premium content?” The walls didn’t have answers for us, so between October and November 2012 we tested our idea. We gave away all of our themes for free. ALL of them. Free and Starter plan users had access to the same templates as Premium users and we crossed our fingers that they’d upgrade.

Assumption: We assumed Free and Starter plan users would be more willing to upgrade once they’d been given access to more themes.

Nope. We didn’t see a significant impact on sales or cancellations for either of those months, so we reverted back to our original plan.

Bottom line: Experiment! Even though we didn’t initially see much change, the act of giving aspects of our product away kept us thinking about how we could better serve our customers.

On December 15, 2012, we launched Landing Pages 107. The idea behind this course was to demonstrate our expertise and build trust with new customers while providing high quality content for conversion focussed entrepreneurs and marketing professionals. Anyone who signed up received emails every 3 days over a 30-day period filled with bite-sized, actionable chunks of content.

We knew it would attract users who wanted to learn more about landing pages before creating a KickoffLabs account, and we included it as a bonus for everyone who did. We hoped it would encourage new customers to opt in to our services — and it gave us 30 days to build a relationship with them that would hopefully allow them to trust us.

Assumption: We created this site, and all of its accompanying material, with the assumption that it would increase conversions by building trust and demonstrating our expertise.

It worked! Significantly! Over the next few months, we saw more and more new customers tagged with the campaign name “LP107” and our conversion rates nearly doubled before starting to plateau. We’re seeing about 10% of our paying users coming from this campaign now, and we consider that to be a success.

7. Does improving the first 5 minutes of your product improve the upgrade rate?

We keep a really close eye on various tracking measures, and we know where drop offs in user activity occur. We’re big on tracking our users’ first five minutes. While we noticed that the majority of users who signed up were able to pick a theme they liked and create a site, the drop off usually occurred when it was time to publish their page.

Made sense. So we fixed it.

In October, before the update, 20% of customers that signed up ended up publishing a landing page. At the end of October, we launched a new editor to improve user experience. Previously, changes could only be made from the sidebar. Now? Users were could make changes directly on the page, among lots of other things we added in.

The result? Success! Over the next few weeks we saw a higher engagement rate. The overall percentage of pages published increase by from 20% to 27% and our upgrade rate increased a similar percentage.

Bottom Line: Use analytics to track where your users are dropping off to focus on areas of improvement.

If there’s one lesson we learned over and over at KickoffLabs, it’s test test test! We increased our pricing, made premium items free, and redesigned our page editing features — all because of testing. Testing our assumptions to find the best strategies for our customers is helping us grow in our success…. and it can do the same for you

Now it ‘s your turn! Tell us what lessons you’ve learned about your business over the past year. Have you had any surprises or successes that we didn’t touch on? Let us know in the comments below — and if you have any suggestions for us, we’re all ears!