It was the week before Christmas and the town was bustling with excitement. People were out shopping, wrapping gifts, and preparing for the holiday. One of the most popular events in town was the annual Christmas contest, where people could submit their Christmas lists for a chance to win some amazing prizes.

The contest was simple: all you had to do was write down everything you wanted for Christmas and drop it off at the town square. The judges would then go through the entries and pick the top three lists based on originality, creativity, and holiday spirit.

As the deadline for submissions approached, the town square was filled with people of all ages, eagerly dropping off their lists. Some were long and detailed, while others were short and sweet.

One little girl named Emily submitted a list filled with toys and books, while a teenage boy named Jack wrote down a wish for a new gaming console. An elderly couple named Mary and John submitted a list with only one item on it: a trip to see their grandchildren.

After much deliberation, the judges announced the winners of the contest. In third place was Jack, who won a gift card to the local gaming store. In second place was Emily, who won a brand new bicycle. And in first place was Mary and John, who won the grand prize of a trip to see their grandchildren for the holidays.

The town was filled with cheers and congratulations as the winners were announced. And as Christmas day arrived, everyone was grateful for the joy and happiness the holiday season brought. 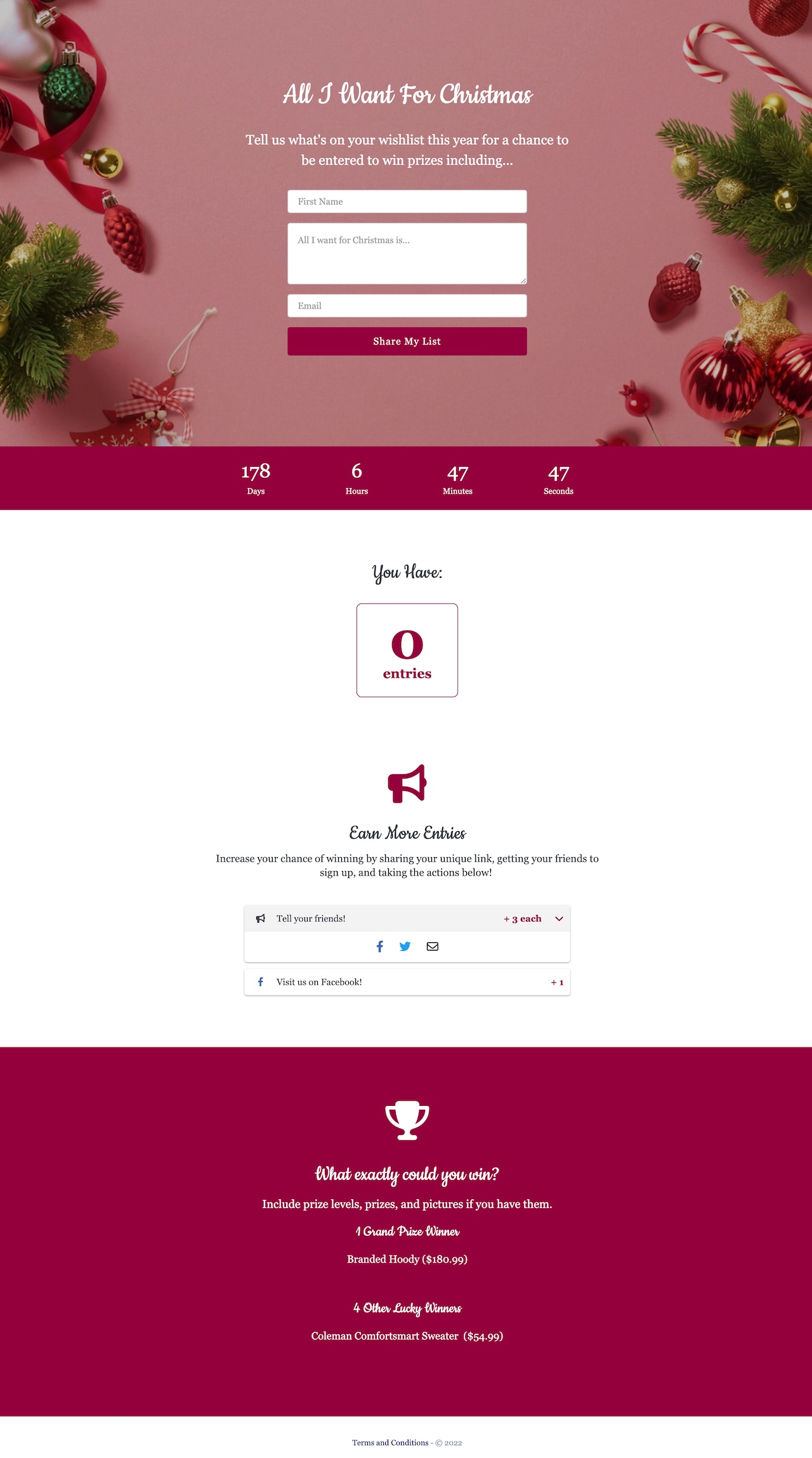 Customize Landing Pages for Your Contest

This landing page template is just a starting point for your campaign in our drag and drop designer. You can easily swap in your brand copy, images, fonts, colors, etc. Go further by adding entirely new content, sections, or contest elements to your contest landing page. Learn more.

About Enter to Win

A bonus entry sweepstakes ends with randomly picking one or more winners. Entrants can increase their odds of winning by referring friends with unique links or taking actions you suggest to engage with your brand.

These templates include an individual's unique share link, the current number of entries, and a list of actions to earn them additional entries.

Foster engagement by having leads earn extra points or entries in the contest by taking several actions. Examples of scoring actions would include referring friends, visiting your store, making a purchase, or following you online. Learn more.

We'll host your contest landing pages that can be published to your custom domain and URL with a paid KickoffLabs plan.