Kickstarter campaigns are a great way to get your amazing product off the ground. The advantages are twofold: For one, a Kickstarter campaign allows you to gage interest in your product or service before you put up too much of the money to actually create it. Second, Kickstarter as a crowdfunding platform helps you turn that interest into monetary support right off the bat. If you do it right, you won’t need a loan from an investor to back your idea - you’ll have a slew of investors who are also your customers.

It’s the ‘doing it right’ part where it gets tough. Around 61% of Kickstarter projects fail to reach their funding goals. Kickstarter isn’t a set-it-and-forget-it type deal; you have to promote your campaign so that it reaches the people who will be interested in your idea so that you can successfully turn them into your adoring investors-slash-customers.

An awesome (and comparably cheap) way to do this is by running contests. 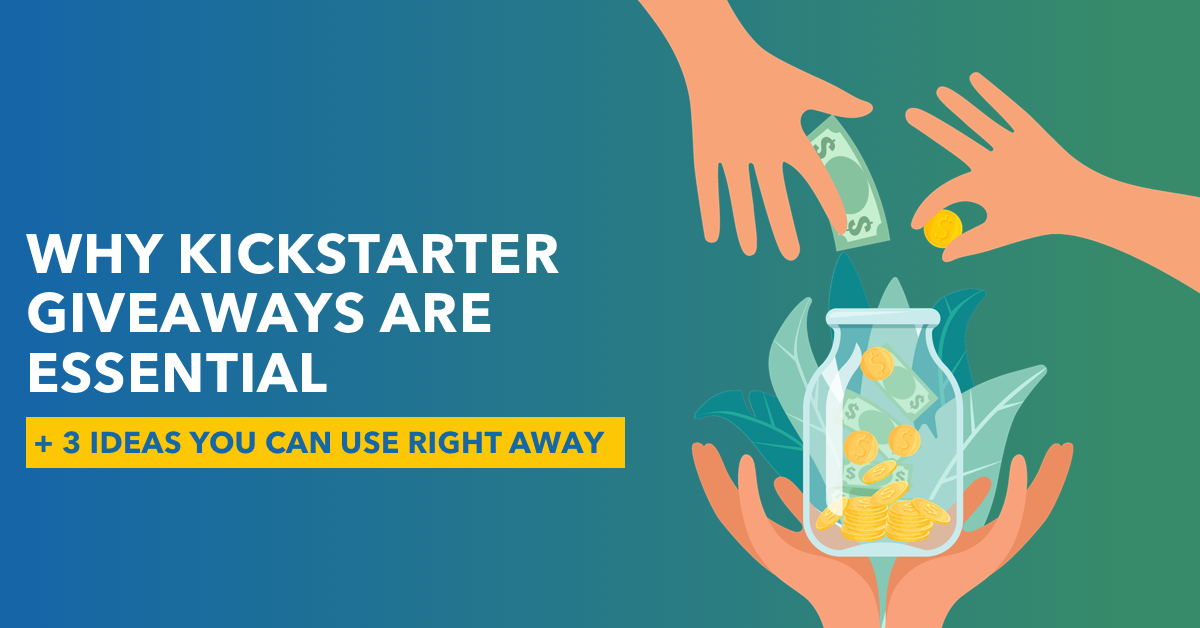 What a Contest Can Do for Your Kickstarter Campaign

Let’s face it, who doesn’t love a good contest? If all you need to do to be eligible to win a cool new gadget is to retweet this tweet or sign up to that newsletter, I bet you’re game - you and thousands of other people intrigued by Cool New Gadget.

By running a contest, you can potentially achieve all of the following:

The key to any successful crowdfunding project is to capture not just people’s interest but their contact information so that you can promote your finished product specifically to them. Because they’re the people who you already know are interested in what you’re selling.

Denmark-based company LastSwab, for example, used a contest to capture 40,000 email leads during their pre-launch campaign of their reusable cotton swab, which went on to raise over half a million US-dollars on Kickstarter. 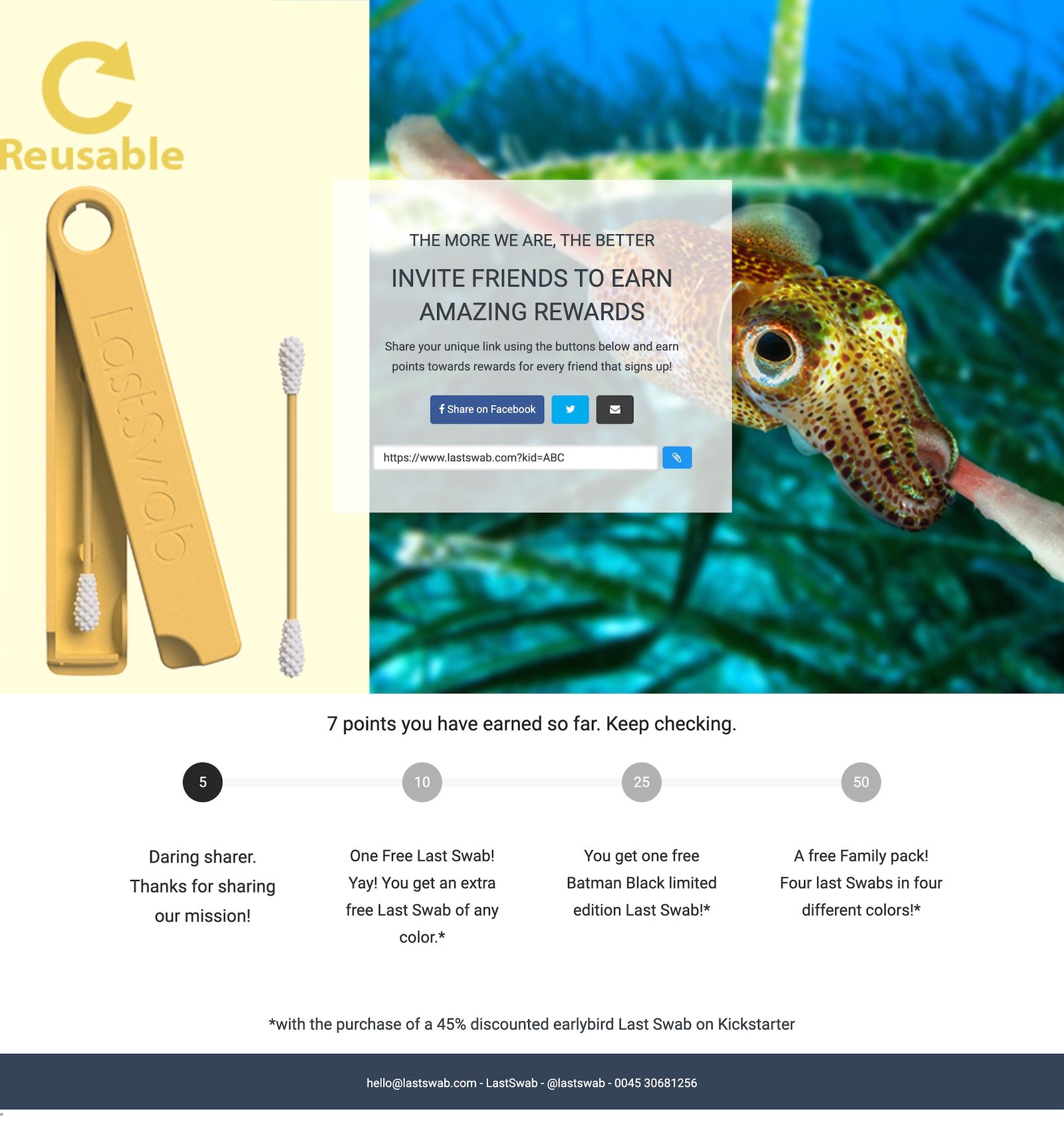 How to Choose the Right Prize for Your Kickstarter Contest

A quick side-note on the prize(s) you choose to give away, because this is really important to the success of your contest. Your prize is what gives people the incentive to enter the contest in the first place, so it needs to:

The best (and really only, but we’ll get to that in a second) prize for you to offer is, of course, your own product or service that you’re crowdfunding on Kickstarter.

By the way, it doesn’t have to be just one prize. You can offer multiple prizes to multiple lucky winners, if that works for your product and campaign. In fact, multiple prizes is a great way to boost entries and engagement. The more they can win, the more likely people are to participate.

A Caveat on Kickstarter Contests

According to Kickstarter’s rules and regulations, you’re not supposed to run contests or raffles. Those are some of the so called “prohibited items” that can cause Kickstarter to freeze your entire campaign.

Which has probably got you thinking: Okay, then what are we even discussing here?

The key is that you can run Kickstarter contests as long as they follow a certain set of restrictions.

There is a loophole to these restrictions: Run the contest completely off the Kickstarter website. Even better: Run it before launching the campaign, since Kickstarter can’t regulate what you do before the launch.

Pro Tip: Check with Kickstarter before running a contest. The above-mentioned suggestions might not be foolproof either, since, in the end, Kickstarter has the last say. 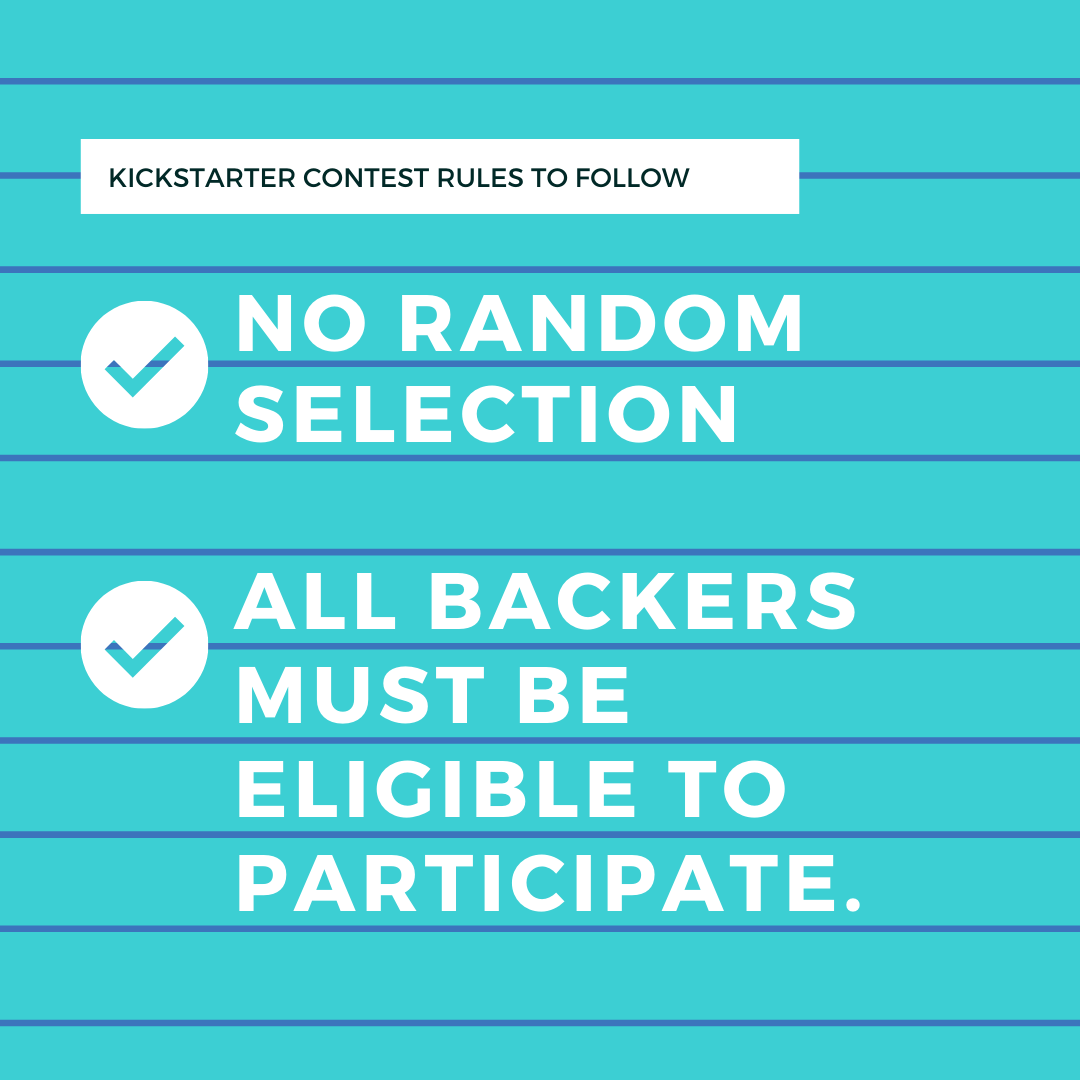 So let’s assume you’re taking your contest off your Kickstarter website to make sure your campaign doesn’t get frozen. There’s still no end to the imagination for running contests to boost your Kickstarter campaign. But why reinvent the wheel when you can start with contests that have proven incredibly powerful?

Artist Andrew Pawley gave away a free monster paper toy download from his Cthulhu Kids Kickstarter campaign to all backers when the campaign hit the 25%-, 50%-, 75%-, and 100%-funded mark each. Note, he gave away the free download to all backers. 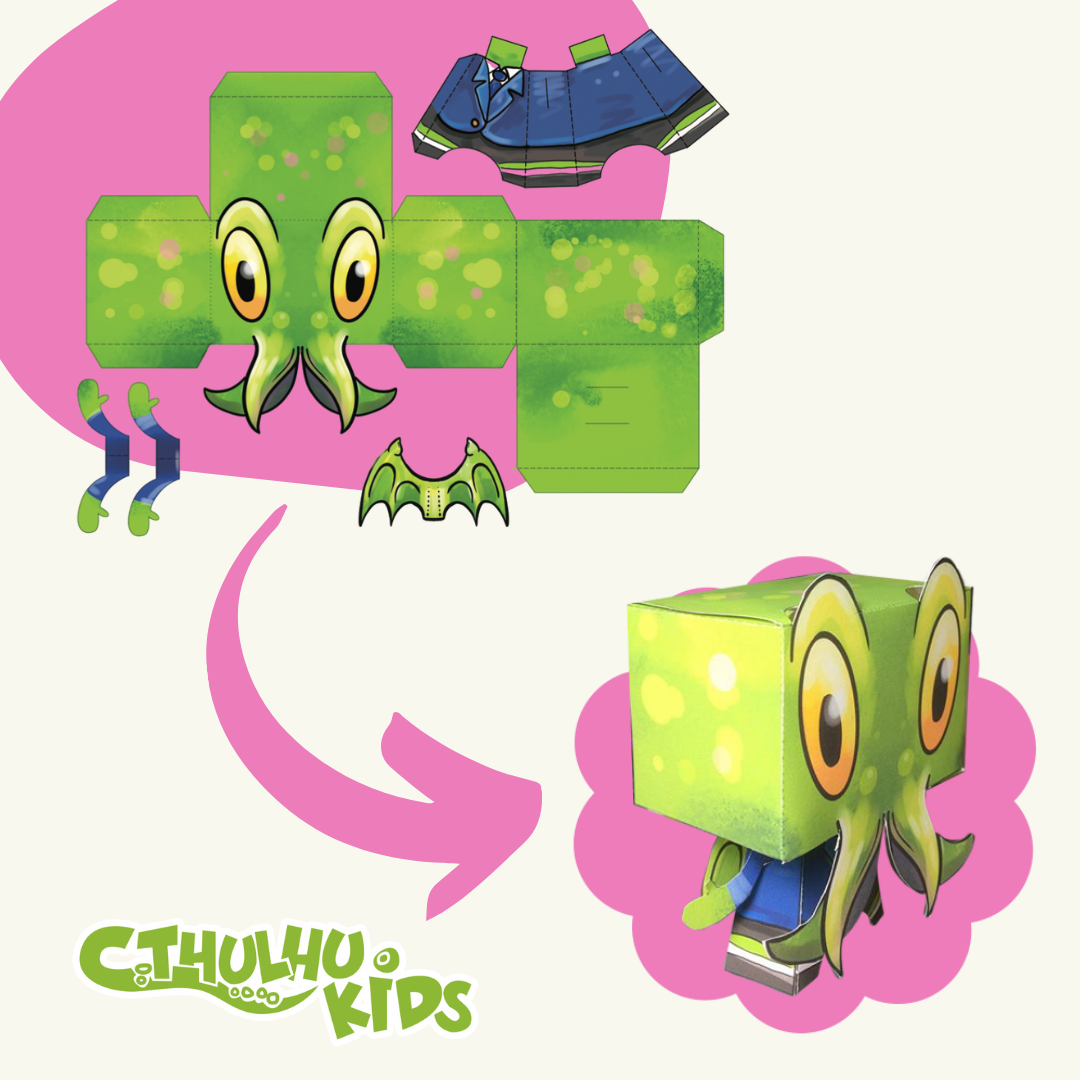 Spike the Beetle ran a campaign on Twitter for users to enter the draw to win a prize by retweeting a specific giveaway tweet celebrating the fully-funded mark. Yes, this is technically a raffle-type giveaway, but acceptable because the contest was run solely on Twitter. 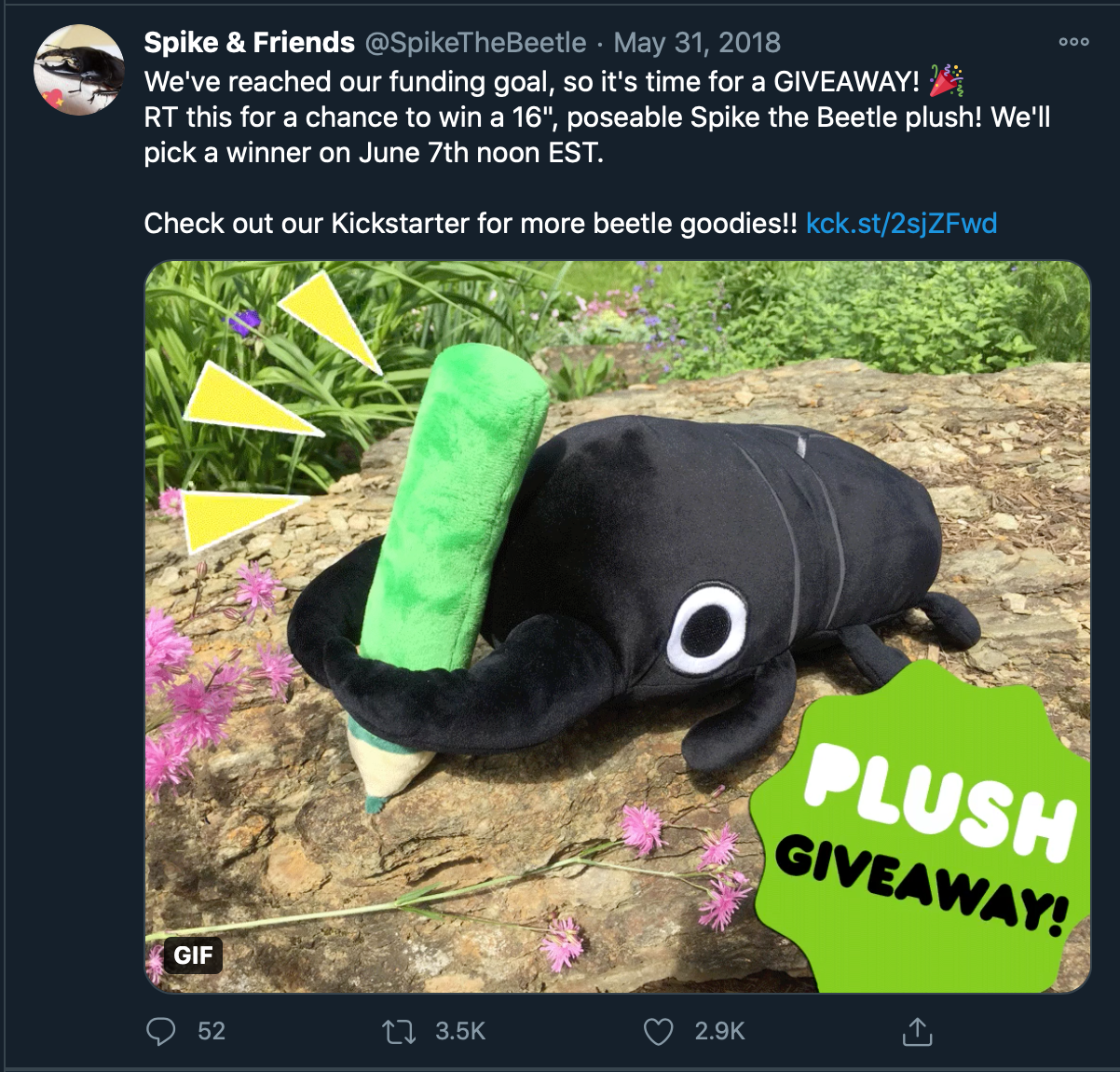 HUDWAY shared a simple giveaway on social media, in which users could enter to win their main product, a portable display for the car. Contestants were given three different ways to enter the giveaway, including (but not limited to) visiting the Kickstarter website. Sounds iffy, since it took people to the website, right? The clou was that the contest itself was run and shared only on social media, not the Kickstarter platform. The contest helped HUDWAY exceed their funding goals by 500%. 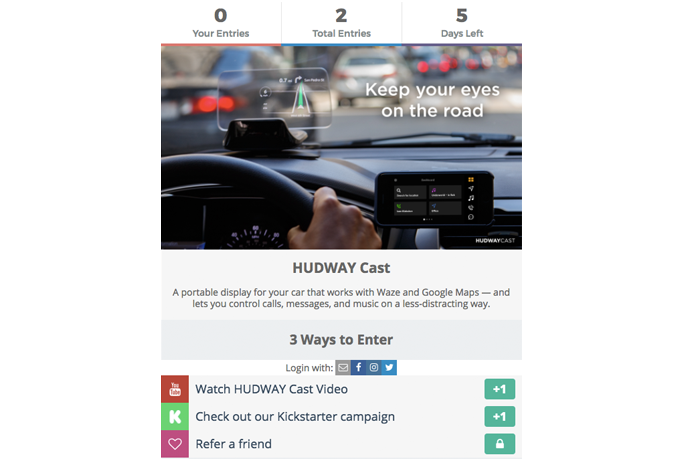 You may have noticed that most of the contests we’ve talked about have one thing in common: They require users to share the contest or Kickstarter campaign with their own circle of friends and followers. Doing it this way doesn’t violate Kickstarter’s rules and restrictions. And if you add KickoffLabs’ rewards system for sharing with your followers to the equation, you’re not even giving the prize to a random winner, but to the person who actually earned the most points. That’s a double score on the not-breaking-the-Kickstarter-rules front. Which is why the previously mentioned LastSwab chose KickoffLabs for their pre-launch contest - and obviously got it right.

How LastSwab Collected 40,000 Email Leads for Their Kickstarter Campaign with a single KickoffLabs Contest

“What KickoffLabs really gave us was not only a really great platform to be able to set up the whole campaign, but also to do this incentive system where if they shared it with their friends, and then they got this automatic link, and then their friends went in gave us their email and verified their email, then they would get free swabs.” - Nicolas Aagaard, co-founder of LastSwab

LastSwab designs an easy to clean, sanitary, and reusable alternative to the cotton swab. They started out on a conservative budget of $4,000 to collect email addresses, for which they ran a KickoffLabs referral campaign to generate those emails ahead of the Kickstarter launch. The conversion rate was phenomenal, leaving them to pay the low low price of half a dollar per email.

Deciding to run with this success, they increased the email budget to $20,000 - and garnered 40.000 subscribers before the Kickstarter campaign even launched. Using those emails as a basis for the launch, LastSwab has raised $765,000 on Kickstarter (as of October 21, 2020).

Listen to the entire podcast episode How Nicolas Aagaard raised over $700k on Kickstarter or read the transcript here for more details.

3 Kickstarter Contests You Can Run with KickoffLabs Right Now

Running a giveaway while at the same time setting up your campaign launch is a lot of work. The crux of the matter is that both are equally important to the success of any Kickstarter campaign. But while you’re most likely an expert when it comes to your product and have a good idea of how you want to present it on your Kickstarter website, running a well-thought-out contest may not exactly be in your wheel-house.

In which case KickoffLabs has got you covered. We’ll not only make it easy for you to run several different types of contests on all kinds of platforms, but by using KickoffLabs, you’ll not be violating the Kickstarter restrictions. 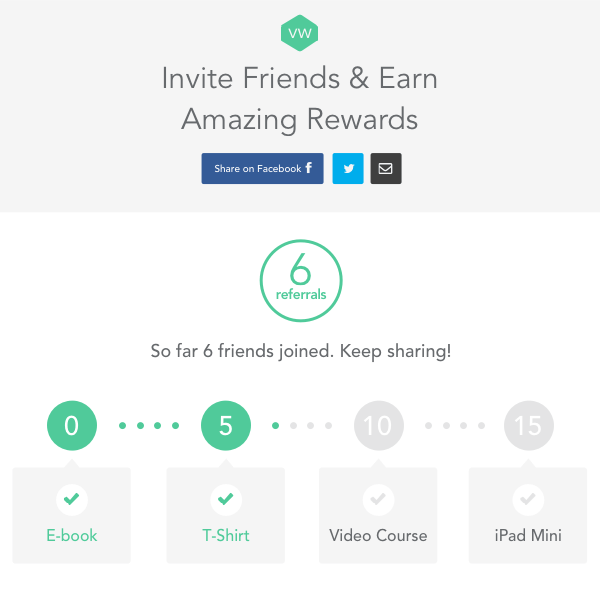 KickoffLabs’ prelaunch waitlist allows you to generate word of mouth on your Kickstarter campaign before its launch by encouraging people to move up the waitlist as they refer friends and earn points. 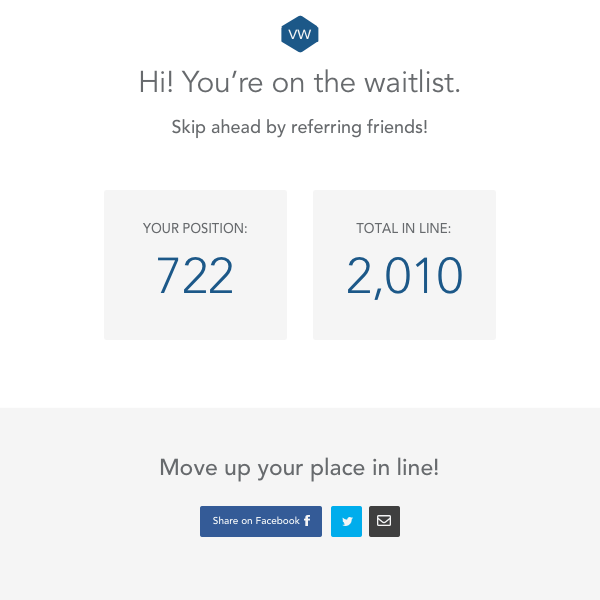 On our leaderboard giveaways, your leads can earn points and move up the leaderboard by referring friends, following your Kickstarter campaign, or taking other social actions that will spread the word about your project. 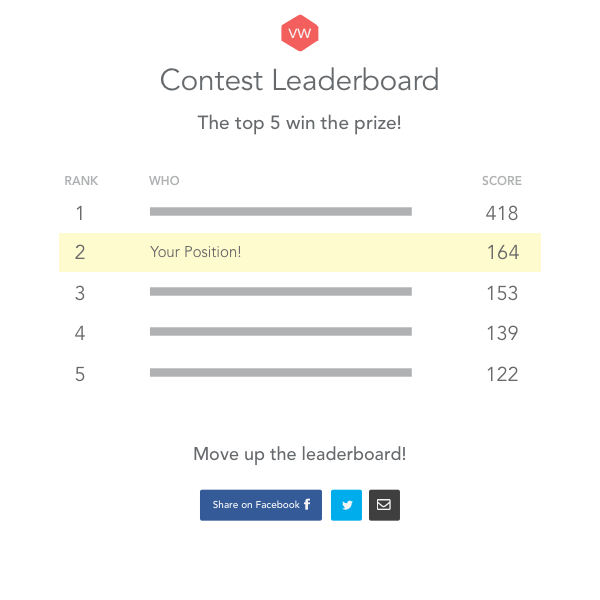 Increase Your Kickstarter Pledges with KickoffLabs

Trouble is, Kickstarter limits your ability to run contests and raffles on your Kickstarter website with certain restrictions. The main loophole to circumvent these restrictions is to run a contest off the Kickstarter platform; for example on Twitter or Facebook - or via KickoffLabs.

Running a Kickstarter contest with KickoffLabs provides an additional loophole to another of KickoffLabs’ restrictions, which prohibits you from drafting a random winner out of a hat.

With KickoffLabs, your leads can ‘earn’ their giveaway prize by sharing your contest, product, or project far and wide, thereby drawing attention to your campaign, engaging your existing audience, growing your following, and reaching a brand new audience - all without breaking the bank.

Start out with a free account to check out what KickoffLabs can offer your Kickstarter!