The ‘Go Big or Go Home’ Startup Mantra is Flawed 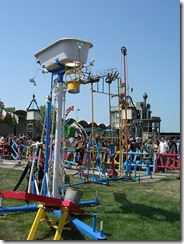 Living inside the techno-bubble as an entrepreneur you are inundated with fraudulent marketing that tells you that you need to go ‘big or go home’ with your startup.  It’s not said as directly as that, but you get the picture when you hear statements like “real innovation is disruptive”.

I was thinking about this last night and didn’t have to go searching for the next example of it in my news stream.

“There is too much investment in incremental innovation, and not enough in building companies to solve important problems”

– Judy Erstin on Startups from RWW

This is picking on Judy, but it just happened to be the most recent example of this message that comes every day. There are several reasons why this philosophy is both wrong and bad for everyone.

Google & Facebook are often cited as examples, but both of these companies started incremental and small. Their stories have been glorified as overnight successes, but Facebook started out as an incremental improvement on existing social networks like MySpace that was only for elite colleges. You might say the only disruptive genius was in the marketing… because it wasn’t in the idea.

Google started out with the idea of making searching for papers on a campus library system easier. They weren’t out to create billions of dollars in ad revenue and never did a presentation early on that explained how they would eventually disrupt traditional advertising. That disruption came much later.

This mantra keeps people on the sidelines with fear that their ideas may not be big enough.  This is during a time when we simply need more profitable ideas run by talented individuals. I know a lot of people that doubt themselves and don’t venture to start because they think that the idea isn’t perfect yet.  It’s paralyzing to think about building the ultimate mouse trap rather than one that’s just a little bit better.

It’s certain that their ideas would have to be tested, but just because they aren’t big and disruptive now doesn’t mean they won’t evolve that way.  Of course they don’t have to evolve to be huge.

Profitable doesn’t mean HUGE.  Do you want to run the next Microsoft? Ignore the whole private G5 part of running a company like Microsoft, Google, or Facebook and really think about it.  I think building these companies would have been fun, but there is a reason Bill Gates left to do charity work.

There are plenty of smaller private companies that are profitable that you’ve simply never heard of.  It’s in our culture to glorify the lottery ticket winners and ignore the smaller success stories because they feel boring in comparison.  But when you talk to these small business owners you’ll find that their stories are anything but boring.  They have a few less 0’s on the end of their bottom line that Microsoft, but they are profitable and employing millions of people in this country.  Many small, agile, profitable businesses are also less prone to complete economic collapse.

Big bets come mostly after small ones. Most of the “Bigger Bets” you read about today are really the founders 3rd or 4th bet where each company they started got incrementally bigger than the previous one. But their previous bet probably never got the coverage it deserved for being a successful business that was either profitable or sold off to make the founder more money for the next bet.  Not many people go all in pre-flop. They make sure they have the cards and contacts first that were built on smaller success stories.

Incremental improvement IS innovation.  Even the Macintosh was an incremental improvement.  If you choose between making business 5% more profitable today for a minimal low risk investment or 50% more profitable by trying to boil the ocean and potentially going bankrupt which would you choose?  Most business owners (the ones that care about being profitable) will pick the 5% improvement. Because if you can keep doing that you’ll get to the 50% goal without going broke.

So there’s my pitch. I’d encourage everyone to get off the sidelines and try something small today.  You don’t even have to quit your cushy day job to experiment… you just have to build a slightly better mousetrap and start building an audience…. Then you can work on bear traps.