How To Growth Hack A Conference

Scott and I (the founders of KickoffLabs), recently got back from Las Vegas… WOOT!

But it’s probably not what you think…

There really wasn’t any of this going on: 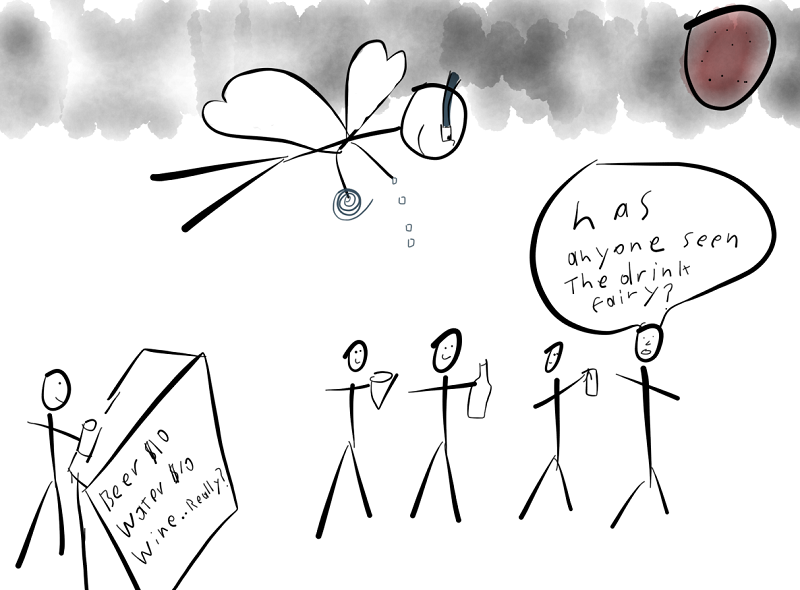 What we were actually in Vegas for was to attend the awesome #MicroConf, a two-day conference focused on self-funded startups that are bootstrapping a business. A category that still, very much, applies to us and was the primary goal of our visit: to learn how to better KickoffLabs.

When the talks started on Monday morning and there were some seriously inspiring founders giving some fascinating lectures and sharing experiences with the goal of helping others in attendance grow their business. It’s a lot to take in.

Last year I took boring notes in Evernote that I never looked at after the conference, but this year I wanted to do something different. Something fun that would help me retain all the good advice…

… I decided I’d start taking notes in sketch form using the marvelous Paper by Fifty Three on my iPad, when the person sitting next to me said: “Woah, it would be cool if people saw you doing that in real time”.

At that moment I noticed the app had a “Share to Twitter” option below each sketch. Although I’m fairly certain that my 4 year olds artistic ability will soon eclipse mine, I confidently started posting each image to twitter with the conference hashtag #microconf.

I got immediate feedback that people liked my sketches in the form of retweets, favorites, and replies each post received. I could see open laptops with twitter feeds that included these images scrolling upwards and attendees with smiles on their faces.

On day one I posted over 40 drawings with advice taken from the conference to Twitter. My twitter follower count had jumped by over 100, and I could see some traffic going from twitter to the KickoffLabs site. At the day I asked if people wanted more and the reply was a resounding “YES”.

That night, at the after party, the stunt served as a great ice breaker. People would introduce themselves, see my name tag, and ask about the drawings, how I did them, and what my company did. Which was perfect since KickoffLabs can really help any entrepreneur. So I knew I was getting leads, but how could I capitalize on this opportunity?

Early the next morning another attendee approached me and asked if he could have a download with all the sketches. I asked if this person was just nutty on Twitter, but no, people agreed that they also wanted a single download with all of them.

So during a short 5 minute break, I jumped into KickoffLabs and [published this landing page: 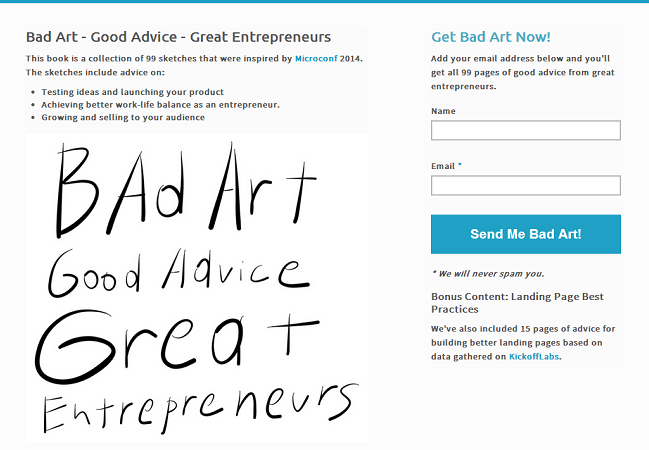 Then passed the link to the 3 people sitting closest to me, and posted it to twitter. At the time there wasn’t a download yet. I just wanted an easy way to capture email addresses ahead of time and release the book with proper branding at the end of the conference.

By the end of the conference 100 of the 200 attendees had signed up to receive the book and 100 additional people that weren’t even attending the conference have also joined the list so far.

Those are relatively small numbers, but without any marketing other than the conference twitter feed I call it a big win. Who wouldn’t be brimming with pride at this small victory? It’s 200 more leads than our product had before the conference started!

I really hope you enjoyed the story, but what does it mean for you and your business?

How could you growthhack any conference or event you attend in order to make it worth your time?

Keeping notes to myself would have been selfish. Sharing them with the world made the conference more memorable for the other attendees and other people who were just following the conference.

Rule 2: Produce something that adds value to the event.

Every conference needs something. You can easily add value any event with any of these ideas I’ve seen work in the past:

Rule 3: Be creative and stand out from the crowd.

Something about what you do needs to stand out. Be the “Purple Cow” of the event. I didn’t just post 2-3 sketches. I created 99 over the course of the two days at the conference. Most of these were published during the conference hours. That was just over seven sketches an hour during the time sessions were active. The look was unique and I flooded a channel on Twitter.

If you take any of the approaches above you have to be committed to being the best source of whatever it is… the best photos, the most photos taken, the best commentary, the most detailed notes, etc. The goal isn’t to grab everyone… it’s to stand out in the crowd.

It probably would have been a waste of my time to have just generated all those sketches… but to have done so AND collected 200 email leads during the two days made it worthwhile. To get attention you have to give a LOT. All I did on top of that was offer up what I was giving away in a nicer package in return for their email address. A PDF people could flip through on the flight back, next week, or whenever they wanted.

Heck – I have given away the PDF link directly to a lot of people as well. It’s ok… I added our branding and links back to KickoffLabs. It takes a little bit of blind faith, but it works.

At the event I would tell people what I was doing, answer questions about it, and then ask people just to help out by retweeting, sharing, etc. It’s important to ask for that extra sharing.

39% of the people who signed up on our landing page came directly from the sharing links you get AFTER you receive your confirmation. That’s a HUGE GAIN to any effort. Did I mention this viral boost and tracking is already built into KickoffLabs?

I didn’t ask for permission to do this. I wasn’t even sure the conference organizers would be OK with it. I just started doing it. I started small with a couple of images to see if people reacted. I asked if people wanted more. Then I offered up the download, (validation)!

Next year KickoffLabs should probably sponsor MicroConf and buy everyone drinks too, even if the ROI on this was arguably better than just being a sponsor… but if you can do both… stand out as the BEST sponsor of your events AND hire a dedicated note taker to do the dirty work of building the content out to truly improve the experience… Even better!

After the conference was over I sketched out a personal thank you to Rob Walling and Mike Taber for organizing the event and let them distribute our book directly as well… which they have. Thanks a lot, guys!

As an entrepreneur I feel like I drown in it, though you shouldn’t feel paralyzed by the sheer amount of low hanging fruit. The point of these rules is not that they are set in stone or that you HAVE to do it… but I want you to have the greatest chance of success.

My story was simply a happy accident. Imagine what we could have accomplished if it was well planned. :)

Now it’s time for you to go out and start getting more leads. Oh, and feel free to use the exact theme I used to growth hack a conference… Log in or GET STARTED TODAY with your 30 day risk-free trial!

BONUS: As a thanks to you for reading this far, HERE is your FREE pdf download with the entire collection of 99 pages, packed with good advice from great entrepreneurs.

I’d really like to hear your thoughts on this advice.

**Have you ever been through a similar experience before?

Do you know of any similar marketing hacks you could share with our community?</p>

Let us know by commenting below!</strong>