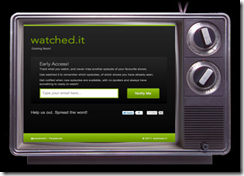 Lee Hambley is a gambler. I know this because he was one of the first people to take a chance on KickoffLabs.

Because of that I’ve been looking forward to posting the Watched.it story.  So here it is in his words.

I wanted to build something which would help me keep track of what TV shows I’d been watching, working a busy schedule and living in a foreign country, I’ve been finding it really difficult to keep track of my favorite shows; my girlfriend and I are hooked on Dr. House, Battlestar Galactica, Stargate: Universe (alas, now cancelled) and more. It occurred to me that with some pretty simple software I could keep a track of what I’d watched, store it online; and share that info with others, if someone else watched an episode of a show I’ve been following, then it must mean that it’s hit the air, and I can watch it too.

From that the idea spiraled a little, and I started realizing that the TV production companies don’t really have any info on the real, 21st century usage patterns of who’s really watching what. At least looking online, for example SG: U was really popular, but they cancelled it, the same with many great Sci-Fi and Drama shows, relegated to late-night cable channels on plans most people won’t pay for.

Between mid-season breaks, cancellations, suspensions, revivals, and more; the TV companies aren’t doing themselves any favors, this is 2011 and people want to watch this stuff on demand, unfortunately that sends many people underground… underground and off the radar.

So, I wanted to give people a forum where they can get a great service, never miss their favorite TV shows, and find a way in confidence to use the data to make sure the TV companies wake up learn how people really want to enjoy their shows. Hulu is helping for the USA, but there’s 200 million people in Europe who are unserved by this rather weak offering!

So, to that end I built Watched.it. It’s a simple API (with a website) aiming to let users “scrobble” (in the last.fm sense of the word) the videos, movies, TV and web-streams that they watch. Simply put the API records the fact that the user “watched” something; and then advises about follow-ups, new episodes, related content and the likes.

I’m a few weeks away from releasing the website, and before the end of the year API integrations with iTunes, VLC and Plex will hit the streets, if I’m lucky the Plex integration should be a drop-in for XMBC users, too. Mobile apps are also in the works, pure and simple HTML5; this keeps maintenance on the low, keeps costs affordable and in something such as the watched.it client there’s really no huge need for a native app.

Who or what inspires you and why?

I’m inspired by technology that solves problems in fascinating ways, such these crazy guys fighting the spread of malaria with lasers which shoot the wings from mosquitos! I’m also inspired by simple software, with a great design; designs in hindsight which seem obvious, such as UNIX pipes, and Rack. I also love technology which empowers people, that’s the reason I love Ruby, and the Rails framework, and the Arduino project for hardware hackers. The 21st century is only just starting, and we’re already pushing boundaries that will change the world for millions of people.

What advice do you have for anyone just getting started with a new business?

Don’t let anybody tell you that you can’t; and don’t listen to people that offer to help, but never lift a finger. Remember that venture capitalists are in it for the money; if you are too, that’ll be a good fit but if you want to make a truly revolutionary product, work hard at it, and build something of value you can probably get 80, or 90% of the way there on your own. Loans are cheap, servers even cheaper, and if you can’t convince someone to help you for free, you might be barking up the wrong tree.

Don’t read too many startup/entrepreneur blogs, and check the credentials of those which you do read. It doesn’t take much to become a celebrity blogger. Some exceptions stand out, hacker news is a great place to find out what other smart people are working on (and a great place to find gauge the reaction of the hacker community to product announcements and releases), and it’s fairly high-quality, and low-traffic.

Use something like instapaper.com keep distractions to a minimum; stay focused, and turn off the IM clients. IM such as Campfire is worth it’s weight in gold, that subscription every month will be paid back when your Mum doesn’t Skype you, or your mates from the rowing club aren’t bugging you about the next drink-up.

Measure everything, measure sign-ups, clicks, page views, the works; you won’t be able to know what it all means early on, and you’ll hopefully never have “stable” figures, but you’ll see the smoke before there’s a fire. Use Google Alerts, and stay into your market.

Do your own SEO, and don’t optimize to death, if your business will live or die based on the success of your SEO campaign, you’re in the wrong business

Kickoff labs fit the criteria here, we’d had a beta page built with Rails before, but the infrequent access in the early months meant the Passenger (mod_rails) workers went to sleep, and that meant the page loading time was horrible for new users. Since then we’ve had spikes of this page built in Sinatra, and Rails, and other weird languages, and we’ve always taken it too far, and/or not done enough. A beta registration page doesn’t need to say much. Some branding, space to tell people what you’re working on, and if you’re onto something word of mouth will do the rest. Kickoff labs fits the bill, it’s not the cheapest way to get a page online, financially at least; but it’s idiot proof, and saves a lot of time