My high school baseball team was required to wear shirts that said “HUSTLE” in big bold red letters on the front.  If we weren’t wearing these shirts we paid for it in laps and pushups.

Credit Dave McClure for pushing the “Startup = Hustler + Hacker + Designer” trend.  It’s got legs and carries some truth about the startup ideology. However – At a recent startup event an unnamed founder handed me a card with his title as “Chief Hustler”.  I wanted to wretch.  Really?

I love the mantra… you’ve got to hustle and get stuff done on a startup team but I hate the connotation of the word, but now people are using this on their business cards and email signatures. It has to stop.

Here are several meanings of the word “Hustler”. 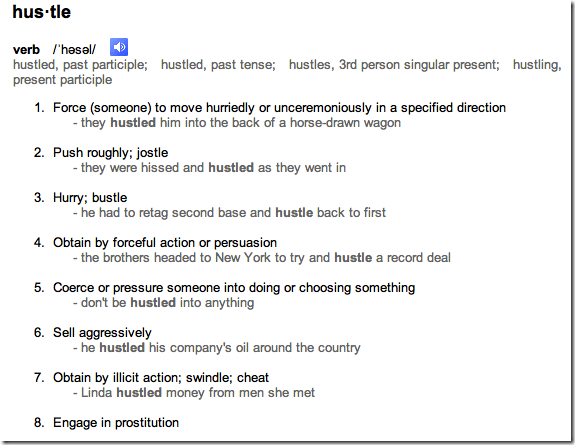 I don’t want most of those associated with myself or my company. I believe that this general tone is also part of what’s leading to the macro-trend of “Movie Zucker” wannabees that Paul Car described on Techcrunch.

many of the current breed of silicon valley wunderkinds have been conditioned to behave like the movie version of Mark Zuckerberg, eschewing humanity and decency for personal profit and glory.

Founders calling themselves “Hustlers” is just another way to self-perpetuate the bad attitudes, “I’m too busy”, and “I’m special” arrogance that’s running rampant in the startup culture today.  If there is a bubble… this arrogance will be a root cause. It was for the banking industry.

I believe that “Founder” or “CEO” is much more appropriate.  I believe in giving people a fair deal.  I believe that no one has to be hustled to create win-win situations for both parties.  Maybe I’m just old and naive though.

Co-Founder – [KickoffLabs](https://kickofflabs.com (Where we believe in hustle, but not hustling.)