7 Unusual Ways to Use Twitter to Grow Your Traffic 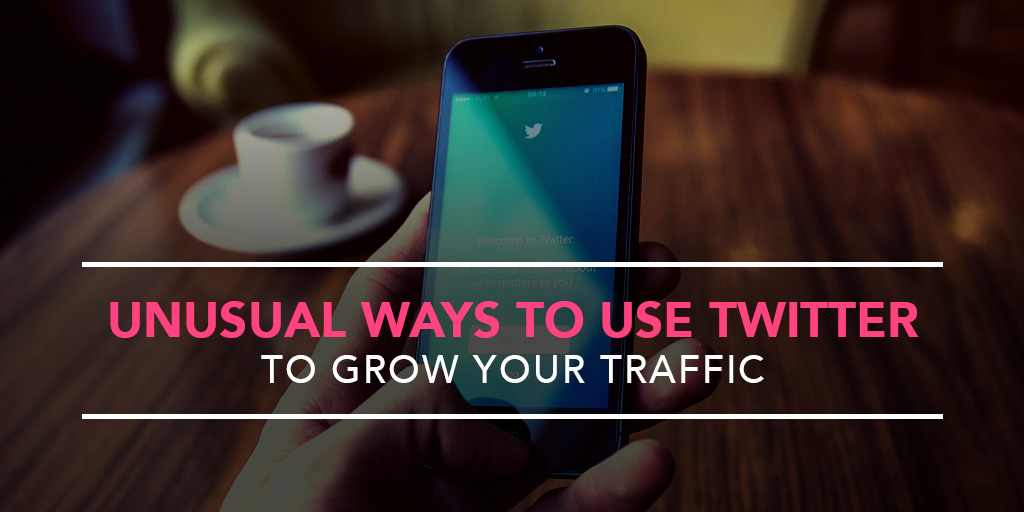 There’s more to Twitter than amassing followers. Sure, that’s a great vanity metric, but to exact the most benefit from this platform, you need think beyond just getting numbers and figure out what to do with those numbers.

In other words, you need a strategy in place to draw them back to your website.

It’s the age old “quantity vs. quality” debate. You need the type of followers who will follow you to the gates of Mordor (or, at the very least, your website). And you need them to share your content with their circle of influence so that others will follow you, too.

And, not just any Twitter follower will do that. You need to find ones who will actively engage with you.

Twitter isn’t just about text. You can and should find ways to stand out with visuals.

According to Twitter’s own research, tweets with images receive 35% more retweets. The science behind it is simple: visual information catches your eye quicker than text and is 60,000 times easier to process and that’s not an exaggeration).

Images can add tone and context. They can also capture attention immediately and viscerally. So, go crazy with images.

But, don’t just stop there. Add infographics, quotes, and videos, too. In fact, videos perform well on Twitter, with a not too shabby 28% boost in retweets.

2. Take Advantage of Your Bio

You’re not just telling people who you are on your bio and leaving it at that, are you?

Allow me to be frank. No one cares how epic you are, they care how you can make them epic.

To that end, use your bio to explain how you help others. Check out this simple example from Teachable: 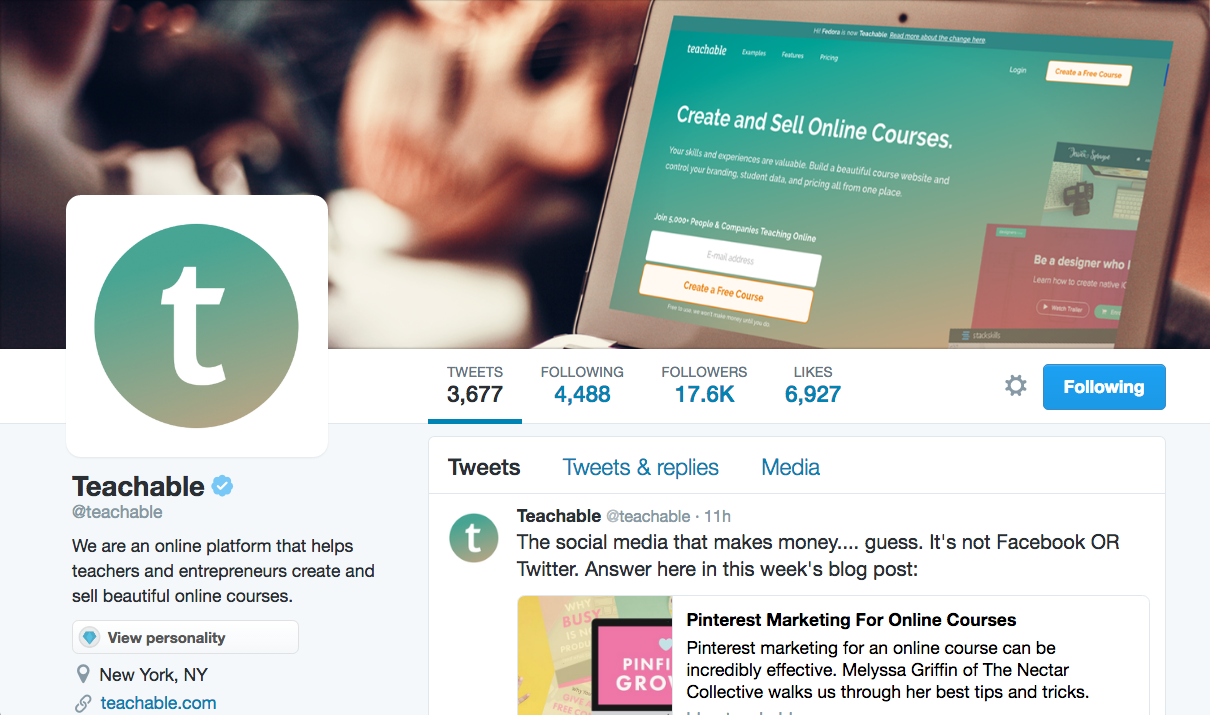 But if you’re a one-person brand, check out how Donna Moritz makes magic happen with this Twitter profile. She offers a free training guide right in her bio. Plus (and this is master class level), she references to it in her Twitter cover photo. 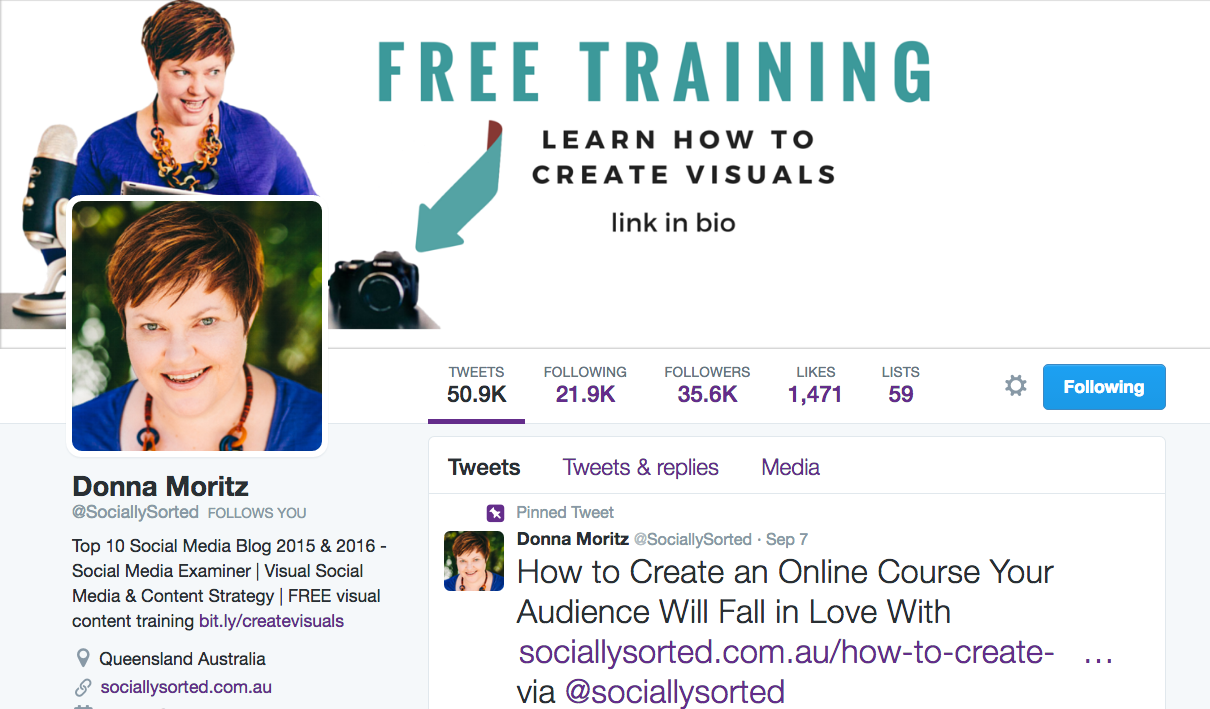 Here’s the takeaway: Include a link to a helpful free resource (preferably on your website). I recommend creating a landing page specifically for Twitter traffic. This will give you a better grasp on traffic analytics.

If you don’t have anything free to give away, considering page of your best content or your latest blog post.

Whatever you do, make sure that you’re guiding your new-found Twitter follower and not just sending them aimlessly to your home page. They won’t know where to look, and they’ll give up before they find it.

No schedule, no rhyme or reason. You just up and decide, I should tweet about this, and you do.

Then, inexplicably and randomly, you disappear off of Twitter for days, weeks, or even months at a time.

The result is that your audience doesn’t know you even though they “follow” you, and you’re certainly not maximizing the amount of exposure you could get if you tweet more often.

So, the next logical question is, how often should you tweet?

Every hour, on the hour.

Sounds a tad obsessive, doesn’t it? I know, it’s sorta hard to swallow, but the truth is tweeting more gets you more.

To illustrate this, I’ll politely direct your attention to an experiment conducted by the folks at Simply Measured. They set out to find if there was such a thing as too many tweets. They decided to post a tweet every 15 minutes for one week. 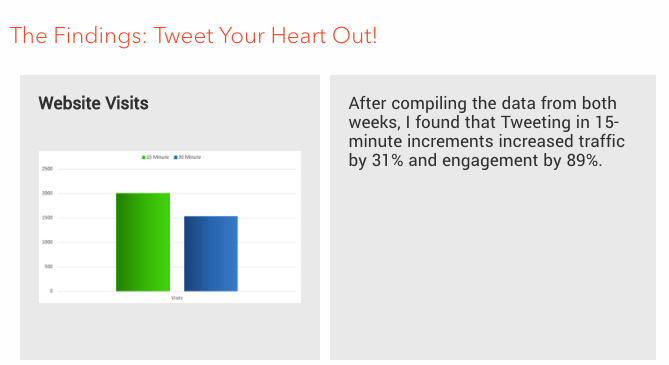 Twitter is a fast-paced social platform. The average tweet has a lifespan of 18 minutes. So, if you think you’re bombarding the Twitterverse with a conservative 10 tweets per day– you’re not.

In fact, most of your followers won’t even see your tweets… which means they won’t like it and retweet it… which means you won’t get maximum exposure to those who don’t know you… which means no traffic to your website.

So, no matter how much you’re tweeting right now, double it. 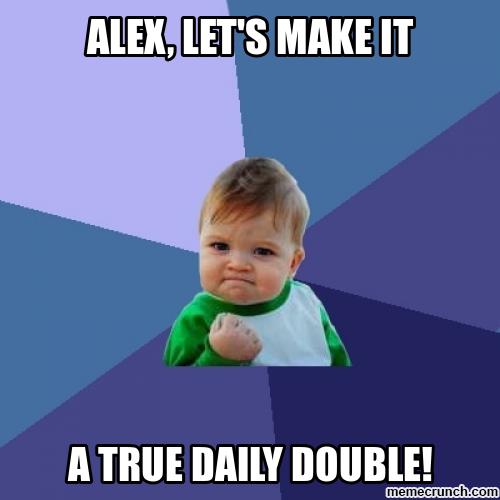 It’s no secret that around here we love contests. Contests are a guaranteed way to get more interest in your brand and grow traffic to your designated contest landing page. However, if you want to be successful, you need to create a prize that’s related to your brand.

By far, the best type of prize to give away is either your product/ service, or explicitly related in some way. This will earn you the most relevant leads.

We’ve talked at length about running contests before, so check it out:

5. Be a Friend to Your Competitors

You don’t have to declare war on your competitors. You can embrace them and build strong referral partnerships. That’s because, even if you do something similar, you may not cater to the same audience. You can join forces and cheer each other on.

So, be a good neighbor and:

By doing so, you’ll get on their radar and earn good will. And maybe even some traffic your way when they promote your content, too.

Remember that the ultimate reason to befriend your competitors is to provide the best resources to your audience. (Even if that means referring your customers to a competitor when it’s just not the right fit. It happens.)

Speaking of promoting other businesses, don’t just reach for the big guys.

With a few exceptions, big brands and influencers are often too “busy” to notice your tweets. But you know who’ll appreciate it? Mom and pop shops and startups who are happy to see a kind tweet, and will be more than happy to share it with their audience. And that means more exposure for you.

A Twitter chat is a scheduled conversation on the Twitter-verse. To stay connected with each other, chat participants used an agreed upon hashtag (such as #BizChat or #SocialTechnologyChat).

Often, the chat moderator will ask a series of questions, using the format Q1, Q2, Q3, and so on. To answer, you’ll respond with A1, A2, A3, etc. You’ll also need to include the specific chat hashtag to get found by other participants within the same chat.

Twitter chats provide an excellent opportunity to build exposure for your brand while adding meaningful content. Use Twitter chats to grow your audience and network with others in your industry. If you’re providing thoughtful answers, it’s practically impossible not to get noticed during a Twitter chat.

Pro tip: If you want to stand out from the crowd on your Twitter chat, add images to your posts (remember what we said earlier?). This will get even more eyeballs on your tweets.